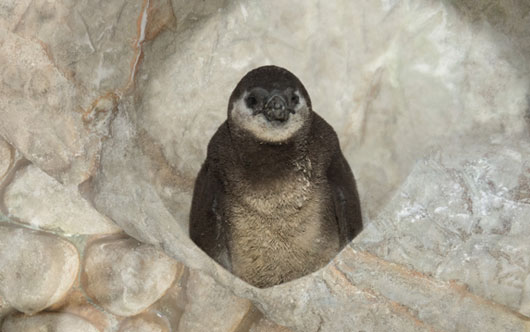 West Edmonton Mall (WEM) has a new resident with the recent hatching of an African penguin at Sea Life Caverns. The five-week old African penguin is the fourth penguin to be hatched in Marine Life over the past four years, and the 15th hatched since Marine Life opened in 1985. The chick’s mother Tweeblik (19) also hatched at Marine Life in 1998, while her father Pita (15) hatched at the Baltimore Zoo in 2003, and came to WEM from the Jardin Zoologique du Quebec in 2008. The chick is said to be spending most of its time in her parents’ territory, although she is beginning to explore more and more each day. Soon, she will be interacting with the other 18 African penguins that call Marine Life home.