WestJet Takes Off From Winnipeg To LA 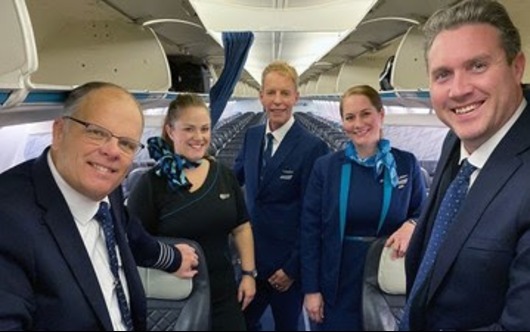 WestJet has inaugurated service between Winnipeg and Los Angeles, marking a major milestone for Manitoba’s tourism, trade and business sectors as Winnipeg gains a seamless four-hour link to the globally renowned film and entertainment mecca.

John Weatherill, WestJet Chief Commercial Officer, said that: “With a thriving film and television industry, our Manitoban guests and partners have long awaited this integral connection and will benefit substantially from convenient flights between both cities.”

Weatherill continued: “As the only airline providing direct connectivity between Winnipeg and Los Angeles, this route not only supports our efforts to bolster the economic success of the communities we serve but provides a vital link that will stimulate new business, investment and tourism opportunities.”

Winnipeg Airports Authority President & CEO, Nick Hays observed that: “The excitement surrounding this new, non-stop route between Winnipeg and Los Angeles has been building ever since it was announced a few months ago.”

And Hays added: “Not only does it significantly enhance the connectivity of the region we serve, but it’s also meaningful for our local economy, particularly the province’s thriving film industry. We’re ecstatic to help bring this valuable route to Winnipeg Richardson International Airport and are proud to see our longstanding partnership with WestJet continue to grow to benefit all Manitobans.”

The departure of WS1315 marks the first of three weekly WestJet flights that travel between Winnipeg and Los Angeles on a year-round basis.

This winter, WestJet will solidify its position as the leading airline in Winnipeg providing more non-stop routes than any other carrier. Further, the WestJet Group will increase capacity to and from Winnipeg by 80% in comparison to 2021, serving 22 nonstop, direct routes and producing the largest year-over-year growth of any major airport in the group’s network.

And guests travelling beyond Los Angeles will have access to a broad network and benefits through WestJet’s strong relationship with Delta Air Lines. This includes codeshare flights to 20 major U.S. cities, the ability to earn and redeem WestJet Rewards on both airlines, top tier frequent flyer benefits through the entire journey, and access to Delta’s LAX SkyClub lounge for eligible guests.