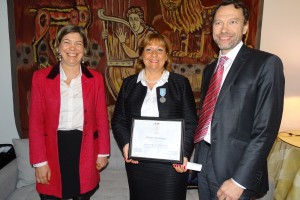 A previous bronze medal recipient, the long-time Canadian tour operator was recognized for her “great support” of the Atout France tourism board and creativity in promoting and selling France (and its territories, like Tahiti).

“We can always count on you,” Atout France Canadian manager Armelle Tardy-Joubert (l) said at the ceremony, which was held yesterday (Feb. 24) at the Consul General of France in Toronto.
Also in attendance were French consul general Marc Trouyet (r) and members of the trade.

Fargeon thanked the tourist board, the agents who had supported her, and suppliers who helped her “put together the best trips to France.”