Porter’s Deluce A Hall of Famer 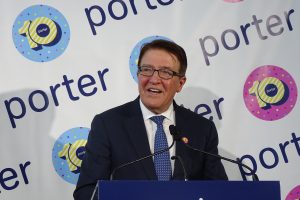 The honour represents a continuing career that began by assisting his parents as a boy with their small hunting and fishing charter service in Northern Ontario, through to his current position at Porter. Deluce is the airline’s founding CEO, having served in the role for more than a decade.

“Bob’s dedication to establishing Porter as a distinct and sustainable alternative for travellers required a strong vision and determination,” said Don Carty, Porter’s chairman of the board. “I’ve known Bob for many years. He is an incredibly skilled business person and has a unique ability to relate to people of all backgrounds and experiences. His contribution to Canada’s aviation system is immense and his induction well earned.”

Deluce has held management positions at a number of airlines over the years, including White River Air Service, norOntair, Austin Airways, Air Creebec, Air Manitoba, and Canada 3000. He is also an active pilot, accumulating more than 13,000 hours of operating time commercially and privately.

Robert joins his father, Stanley Deluce, who was inducted into the CAHF in 2007 for his own significant achievements related to establishing regional air service in numerous northern Canadian communities.

“My induction is a tremendous honour,” said Deluce. “It represents many people, places and companies that I’ve been privileged to associate with. Starting with my parents, eight siblings and countless mentors, colleagues and friends, I’m immensely grateful for the support that has been provided to me.

“The work we are currently doing at Porter is really just beginning. I’m very committed to working with our 1,500 team members as we grow the award-winning airline we’ve all worked very hard to establish.”