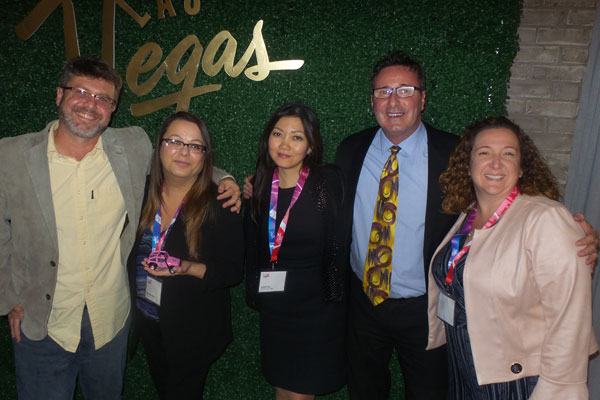 Do the rugged vehicles whose manufacturer liked to boast in an ad campaign that it wrote the book on four-wheel-drive look pretty in pink?

Kozlowski is with Las Vegas’ Pink Jeep Tours, which has a fleet of 150 vehicles, including Jeep Wranglers, all of which are painted pink.

The vehicles are used for guided tours of Las Vegas itself and the surrounding area, including locales with such foreboding names as Death Valley and the Valley of Fire.

Pink Jeep Tours has both air-conditioned enclosed vehicles and open-air ones with canopies, with Kozlowski saying during a Thursday Las Vegas gathering in Toronto that her employer “strips the Jeeps to the core” after acquiring them and then adds its own touches, such as leather seats.

The iconic vehicles used by Pink Jeep Tours – which has similar operations in other parts of the United States – began life when the owner and his wife took a Hawaiian vacation, spotting a hotel which had a pink exterior, with the wife smitten by the paint scheme and suggesting that their company use it for their vehicles.

“He’s a good husband,” said Kozlowski, who was handing out pink pens to travel agents and has a pink business card. “He listened to his wife.”

Some tourists assume the Jeep excursions are for female visitors, with Pink Jeep Tours reassuring them that all are welcome.

Pink Jeep Tours’ clients can’t operate the vehicles themselves, instead leaving that to one of the company’s guides. Those guides are knowledgeable on the likes of local flora, fauna, geology and history.

Hotel pick-ups are available, with Kozloswki noting that there’s no risk of clients mistaking a tour competitor’s vehicle that’s likely painted white or black with an eye-catching Pink Jeep Tours one.

“We get a lot of attention,” Kozlowski says. “You can’t miss us.”