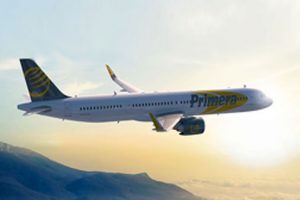 Low-cost carrier Primera Air is introducing service to Toronto from its new bases in London (Stansted), Birmingham and Paris.

“2017 has been a groundbreaking year for Primera Air and once again we are very proud to announce our new direct routes from our European bases to Canada. Toronto will be a great addition to our earlier announced New York and Boston routes from London, Birmingham and Paris,” said Andri M. Ingolfsson, president and chairman of Primera Air.

“With our brand new Airbus A321neo airplanes, we are opening routes that were previously served only by wide-body aircrafts. With the efficiency of a new-generation of aircraft, we are now able to offer unprecedented prices to our passengers from France and UK to the US and Canada. At the same time, we are delighted to be offering a low-fare/high quality product and service concept that will be perfect both for leisure and business travellers,” he added.

Primera Air will provide two classes of cabin – full-service Premium and low-fare Economy, with all passengers provided with WiFi and the ability to charge their devices on board.

Year-round services from new bases to Canada will commence in May 2018.