Puerto Rico On The Mend 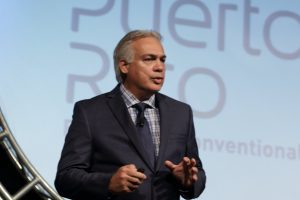 Meet Puerto Rico is offering thanks for what it says is the continued outpouring of concern and support from partners, clients and media colleagues as Puerto Rico works to recover from hurricane damage.

“Our goal to keep you updated on our news and plans continues,” the organization says. “San Juan’s hotels are opening, power (by generator) is keeping the lights on in many of our hotels, gas lines are now at a normal level, the port is fully operational with Carnival Cruise Line and Royal Caribbean already sailing this month and Norwegian Cruise Line returning Nov. 12, the airport is fully operational and open 24 hours – by the end of November we will have more than 700 domestic and international flights daily. Additional service status can be found at status.pr for daily updates.

And our popular attractions will be announcing their official opening dates from now to the end of December.

“We are pleased that the Puerto Rico Convention Center, which did not withstand any significant damages, will continue as the command centre of operations for the Government of Puerto Rico, The Federal Emergency Management Agency’s (FEMA) 600 FEMA workers, contractors and National Guard members directing relief efforts until the end of 2017. Starting Jan. 1, 2018, following FEMA’s departure, the Puerto Rico Convention Center will resume its schedule of conventions. Three January conferences are already confirmed.

“We are now entering our engagement phase – interacting with the industry and media on a consistent basis – starting with IMEX – where we met personally with approximately 30 media and over 300 potential clients. The response was supportive and positive. We shared our updates and asked for their input on new ideas, new approaches and new commitments that we can work on together and share in the anticipation of relaunching and rediscovering Puerto Rico.”

Meet Puerto Rico adds its calendar of events remains intact and “you will have the opportunity to hear personally from us at upcoming trade shows, conferences and events.”