Home › Destinations › Punching Above Its Weight

Punching Above Its Weight 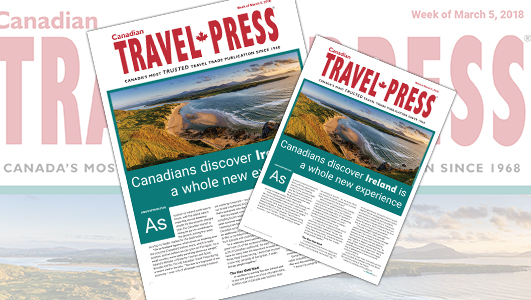 As tourism to Ireland continues to boom, with the island nation reporting record-breaking results for the 7th straight year, the Canadian market is doing its part to contribute to the growth, joining the ranks as a top 10 feeder market for the destination, reports assistant editor, Ann Ruppenstein in this week’s digital edition of Canadian Travel Press.

“We’ve finalized figures, which show us breaking over the 200,000 [Canadian] visitors mark, which is really positive and we believe we can grow on that again. As a small country, we’re really punching above our weight,” Ireland’s Minister of State for Tourism and Sport, Brendan Griffin, TD, told Canadian Travel Press during a recent visit to Toronto. “Tourism is a huge part of our economy – over 10% of all people working in Ireland are working in tourism – so we know where our bread is buttered and we want to ensure that’s sustained into the future.”

With increased connectivity from Canada, including 8,000 weekly seats to Ireland at peak summer season, one in five Canadians claiming Irish heritage and a 12% growth in Canadian arrivals in the books – representing an additional 27,000 visitors over 2016 – Griffin is confident the number of visitors from Canada will continue to soar.

“In a relatively short period of time we’ve gone from 2% of the outbound market to 4.2% of Canadian outbound,” he said. “We have so many links it’s important to build on those, keep those strong. I think that tourism is one way certainly of doing that. It really brings people together.”