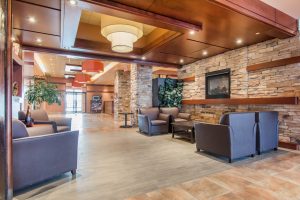 Quality Inn & Suites Lévis added another award to its trophy case after it was named the 2016 Canadian Hotel of the Year at the 62nd Annual Choice Hotels International Convention in Las Vegas.

The hotel was singled out for exceptional service and comfortable, friendly environment from among more than 325 hotels operating within the Choice Hotels family in Canada.

Located in the Lévis City area, the 96-room and suite hotel is also a recipient of the Choice Hotels 2016 Platinum Hospitality Award which honours the top-rated hotels in the system. It has previously won three Gold Hospitality Awards, was awarded TripAdvisor’s Certificate of Excellence five consecutive times and is a member of their Certificate of Excellence Hall of Fame.

The hotel is less than two km from the Lévis Convention Center and is popular with both business and leisure travellers.