Home › Hotels › Return of the Queen

Return of the Queen 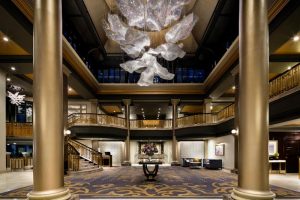 The two-year project celebrates both the history and natural beauty of the west coast, and elevates the historical property into a new era of modern luxury.

Gracing the exterior of the building is the porte cochere, which was constructed to provide a sense of welcome prior to entering the spectacular new reception lobby. The showstopper is the “Twill Flower” – a six metre high floral-shaped chandelier. Hand woven with approximately 250,000 crystals the sculpture is homage to Victoria’s reputation as the City of Gardens.

Phase One of the iconic restoration launched in June 2016 with the grand opening of Q at the Empress – a new restaurant and bar.