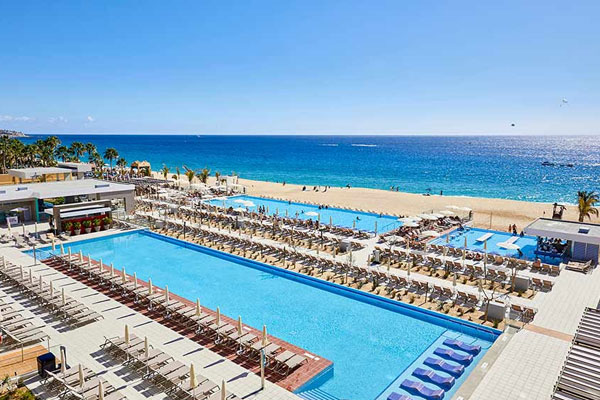 The all-inclusive resort has 24-hour room service and is also the chain’s first adult-only hotel in Los Cabos.

With the new hotel, RIU is taking another step in the innovative architecture of its hotels by changing the structure of the spaces, bars and restaurants. This lets views of the sea take centre stage. Palace Baja California, like the newly opened Riu Palace Costa Mujeres hotel, represents a 180-degree turnaround in the usual layout of RIU hotels. In both cases, the communal areas, restaurants and daytime bars have been raised a level and positioned overlooking the sea to offer guests a continuous view of, in this case, the Pacific Ocean. In addition, 32 rooms have been elevated, which means that this is one of the hotels with the greatest number of rooms with full sea views (82). A tiered water feature with infinity pools has also been built.

Riu Palace Baja California has 602 rooms characterized by pale hues and wood, which offer free WiFi, air conditioning, a spirits dispenser and a mini-bar. Adults only means that the facilities, as well as the little luxuries and amenities, are all designed for couples. Guests will find a welcome cava cocktail, bathrobes in the bedrooms and the option to book a romantic, candlelit dinner on the beach.

The resort has four pools, two of which have swim-up bars. Its main restaurant Promenade has show-cooking. There are five themed restaurants: Indian Taj Mahal, Japanese Yu Hi, Italian Sofía, the Guacamole steakhouse, fusion cooking restaurant Krystal, and the grill Pepe’s Food. There is also a lounge bar and a patisserie and ice cream parlour, Capuchino.