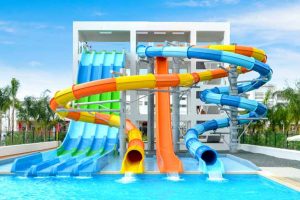 RIU Hotels & Resorts has expanded the range of amenities of its five-star adults-only hotel on Arena Gorda Beach in Punta Cana.

The Riu Republica opened a little over a year ago and the chain decided to expand its amenities by adding an exclusive water park, Splash Water World, and four new a la carte restaurants, three swimming pools and 300 new rooms.

Splash Water World has “four intrepid slides” exclusively for guests of the Riu Republica, making it the second park of this type RIU has in Punta Cana. After the expansion, the resort has eight swimming pools, three of them with swim-up bars and one covering 900 square metres. The pools are surrounded by sun decks with lounge chairs.

The resort now has 10 restaurants – two buffets for breakfast and dinner; the Italian Tarantella; the Asian Kaori; the steakhouse Quisqueya; two Kulinarium fusion eateries; the Spanish Olé; a new jerk grill open daily in the pool zone; and the Taj Mahal, where guests can enjoy Indian cuisine.

Other amenities include eight bars (one of them open 24 hours a day), a gym, a steam bath, a Jacuzzi, and the Renova Spa wellness centre, which has a beauty and hair salon and massage service.