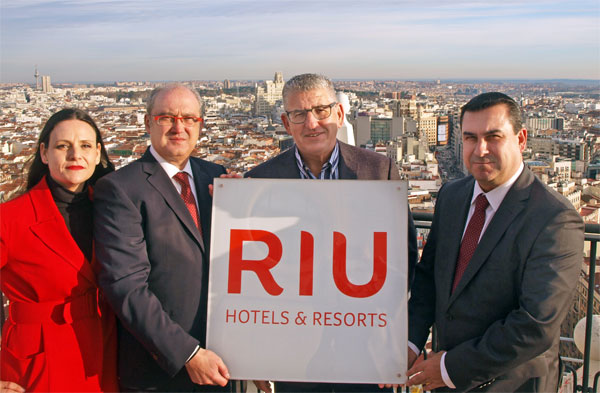 RIU Hotels & Resorts has a new brand image that’s “more modern, fresher and warmer” and will accompany the new style the hotel chain has been introducing in its hotels through major renovation projects and new openings.

The change in image is seen as a natural step in this modernization process and is taking place in a year of record investment in hotel construction, renovation and acquisition that in 2017 reached 600 million euros.

The chain foresees changing the brand image in all its hotels over the next two years, introducing the new image in 50% of its properties in 2018 and the remaining in 2019.

Meanwhile, the hotel chain closed 2017 with 2.156 billion euros in revenue, 7% more than in 2016, while investment in openings, renovations and land and hotel acquisitions represented 200 million euros more than projected at the start of the year, totalling 600 million euros.

This year’s hotel openings will be kicked off with the presentation of the ClubHotel Riu Chiclana. The hotel, a favourite with families, located in Sancti Petri, Cádiz, will reopen in time for Easter after a complete renovation and new amenities, including a water park. Later, in April, the Riu Santa Fe located in Baja California, Mexico, will begin welcoming guests, followed in June by the ClubHotel Riu Tequila in Playa de Carmen. The Riu Palace Punta Cana will reopen in July, and the Riu Palace Tropical Bay, in Negril, Jamaica, will be presented in October.

The Riu Astoria, in Golden Sands, Bulgaria, will open in June with 530 rooms, the rest of the openings will be concentrated at the end of the year: The Riu Palace Boavista, on Boavista Island in Cape Verde, will open in early November; the Riu Palace Costa Mujeres will join the recently opened Riu Dunamar, in Costa Mujeres, Mexico, also in November; the year will close with the opening in December of the Riu Palace Baja California, located in Los Cabos, next to the Riu Santa Fe, giving RIU three hotels at that Mexican destination.