Le Mount Stephen – a hotel where prestige and heritage meet 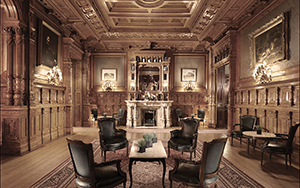 The Tidan Hospitality and Real Estate Group, established in 1970 by Mike Yuval and Jack Sofer, is unveiling its most ambitious hotel project to date: Le Mount Stephen. Created in association with the Montreal architectural and design firm Lemay, this remarkable, forward-looking hotel celebrates a history rich in tradition. The hotel will open its doors at the beginning of May 2017, coinciding with Montreal’s 375th and Canada’s 150th anniversary celebrations.

The legendary George Stephen House, completed in 1883, tells the story of a man, a place and a city. Located at 1440 Drummond Street in Montreal's Golden Square Mile, the exclusive neo-renaissance social club was founded in 1926 by Scottish-born businessman George Stephen, also known as Lord Mount Stephen. Today, the building still bears the name of its original owner, who left a lasting mark on the property.

George Stephen was the first president of the Bank of Montreal in 1876 and later the president of Canadian Pacific Railway. After a successful career in Montreal, he moved back to England where he lived until his death in 1922. In 1975, his former home was classified as a historic monument by the Government of Quebec and designated as a national historic site by the Government of Canada. The Renaissance Revival mansion is a significant heritage site thanks to its architecture, grandeur and integrity. Building on this history, the former Mount Stephen Club is being transformed into the lobby of a spectacular boutique hotel that will stand out thanks to its meticulously designed façade.

Open to the public

In 2006, the Tidan Hospitality and Real Estate Group acquired this exceptional property, which was a private club until 2011. Gentlemen’s clubs, originally a British phenomenon, appeared in Montreal at the turn of the 20th century. At the time, there were many establishments bringing together elite men working in finance and politics. Surprisingly, women were not allowed entry to the Mount Stephen Club until the 1970s. Today, by transforming the Mount Stephen Club into a luxury hotel, Yuval and Sofer are bringing this majestic heritage site to the masses.

With this new chapter, there’s no doubt that Le Mount Stephen will make a name for itself – it is history in the making.

Le Mount Stephen will feature 90 prestigious rooms and sky-lofts, all with floor-to-ceiling windows and some with private terraces. In addition, its three banquet halls will feature a capacity of 500 people. Thanks to its blend of neoclassical and contemporary design, it will offer guests an elegant atmosphere.

This building's features are impressive:

- 90 prestigious rooms and sky-lofts, some with private terraces

- Three banquet halls with a capacity of 500 people

- Two bars in the lobby

Even in its early stages of construction, the hotel was already earning accolades. At the 45th edition of the Canadian Architect Awards of Excellence, the future Le Mount Stephen won the coveted Award of Merit. The jury of the prestigious 2012 event described the project as innovative and dynamic.

Just steps away from some of Montreal's most fashionable boutiques and museums, Le Mount Stephen has made it its mission to create a unique, high-end experience where contemporary luxury meets timeless elegance.