Tidbits about the Thousand Islands 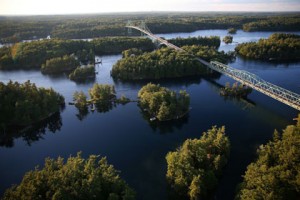 Did you know that the original Mary See, of candy-dynasty fame, considered Gananoque her hometown? In a book published in 2005, See’s Famous Old Time Candies, the author notes that Mary was born on Howe Island. That may be common knowledge, but few people realize that she started creating her chocolate candy recipes while helping run her husband’s hotel on nearby Tremont Island. She and her husband, Charles, are both buried in the Willowbank Cemetery, just outside of Gananoque. The 1,000 Islands served as a backdrop for her first candy creations, before she moved south with her son. Maybe Mary drew inspiration from her “sweet” surroundings on the St. Lawrence River.

The majestic St. Lawrence River once had real pirates traversing its waters.

One of those fabled pirates is Bill Johnston who plundered and torched the British steamer Sir Robert Peel on the St. Lawrence in 1838, after looting its valuables and removing its passengers to shore. Known as the Pirate of the 1,000 Islands, Johnston was a renegade who was born in Quebec, but was made famous by this escapade in the heart of the 1,000 Islands region.

Only in the islands

The 1,000 Islands region is known for its biodiversity – but did you know that there is an island with its own micro-climate?

Georgina Island’s subtle differences make it the perfect home for 12 rare plant species. According to the Frontenac Arch Biosphere, it harbours the unique pink lady’s slipper orchid as well as Indian Cucumber Root.

It’s one of the islands belonging to the Thousand Islands National Park – so you can dock there and go for a stroll on the island’s trails.

Tales of buried gold and jewels are rich in the 1,000 Islands.

Dozens of islands reportedly have barrels of silver or sacks of gold hiding beneath the soil, originating from raids in the 1800s, shipwrecks and treacherous behaviour.

Over the years, many people have tried to locate some of the spoils, but with details waning from generation to generation it becomes increasingly difficult to pinpoint locations.

There is a structure in the 1,000 Islands that spans the history of two countries.

President Franklin D. Roosevelt and Prime Minister Mackenzie King were on hand on August 18, 1938 to dedicate and officially open the Thousand Island Bridge and celebrate this achievement along the international border.

But they weren’t alone.

According to information from the Thousand Islands Bridge Authority, an estimated crowd of more than 25,000 people was also in attendance at the border, while thousands more lined the motorcade enroute as it proceeded to the ceremonial site. Today, annual crossings exceed 2,000,000 vehicles!

Smuggling has an infamous history in the 1,000 Islands. With all the nooks and crannies among rocks and caves it’s no wonder smugglers successfully ran everything from animals to alcohol to gold across the river.

One such cove starts near Virgin Island and ends at Smuggler’s Cave. The cave was known as a depot rumoured to house prohibition-era alcohol, pirate loot and other treasure.

Another place to explore that has a history with smuggling is on Hill Island. According to Frontenac Arch Biosphere, the Horse Thief Trail took horses south and beef north during the war of 1812 and remains of it can actually still be walked.

Curious about what lies beneath the surface of the fabled St. Lawrence River?

Well, it's history itself.

The 1,000 Islands is a haven for fresh water scuba diving enthusiasts, as the riverbed is home to the silent skeletons of shipwrecks.

Local scuba diving companies explore these sunken ships for an up close and personal journey into a memorable underwater realm that few get to experience.

The Gananoque Boat Line also offers a look at these testaments to years past, with the Canadian Signature Tourism Experience, the Lost Ships of the 1,000 Islands cruise.

This two-and-a-half-hour cruise gives ship wrecks in the St. Lawrence River a voice, by displaying diver video footage coupled with compelling commentary, when the vessel glides over wrecks lying below.

The cruise was chosen as one of only 40 experiences from across Canada for the distinguished honour of being a national signature experience and being promoted internationally.

The 1,000 Islands on the St. Lawrence River is famous as a playground for fishing enthusiasts. Ever since the area was settled anglers, guides, visitors and locals have fished the waters, enjoyed legendary shore breakfasts made from their catch and told a few tall tales along the way.

The region has recently seen celebrities like up-and-coming angler Ashley Rae, Canadian fishing icon Big Jim McLaughlin, and even Bob Izumi casting their lines into the waters surrounding the islands. No wonder – even the smallmouth bass are larger-than-life. The smallies which win hourly prizes during the annual 1,000 Islands Big Bass Challenge are typically over 5 lbs.

The world–record muskie was also caught here - and tales of even larger fish still persist.

For more than 100 years, the 1,000 Islands has been a playground for the rich and famous.

According to the publication A history of Recreation in the 1000 Islands, celebrities started flock to the region to escape, as the 1,000 Islands gained notoriety for its large-scale homes, castles and relaxed river lifestyle.

Of course, most people are familiar with Boldt Castle and Singer Castle, but there is also a long list of celebrities who frequented summer homes to get lost among the islands.

Prime ministers and presidents, the Kellogg family, the Wrigley family, editor of Scribner's magazine, the head of the Singer Sewing Machine Company, the head of Macy’s Department store in New York City, famous Canadian musicians, internationally-renowned authors and playwrights, NHL players, political celebrities like the Trudeaus, and even poet John McCrae of In Flanders fields fame are all rumoured to have spent time cottaging in the 1,000 Islands.

Today, the tradition of welcoming celebrities continues as the island setting provides an opportunity for privacy.

The Gananoque Boat Line has been operating for more than 60 years as a premiere way to get among the legendary 1,000 Islands and learn about their history. The boat line originated by ferrying people across the pristine waters of the St. Lawrence River as a mail run – and has evolved to include five vessels, which average 300,000 people annually. In fact, GBL celebrated its 11-millionth customer last fall. Wow!