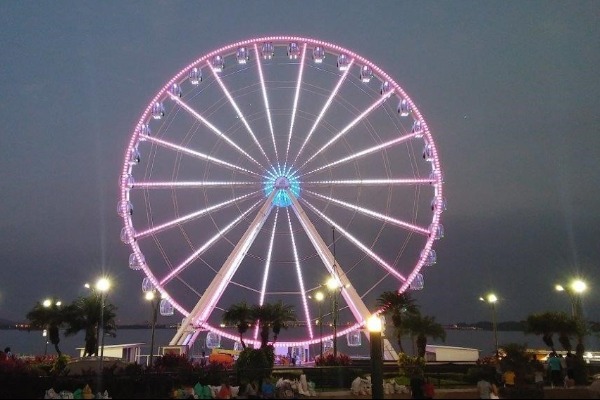 An illuminated 150-foot observation wheel is among the attractions being planned for Golden Gate Park’s 150th anniversary in 2020.

The wheel will provide riders with sweeping views from the ocean to downtown San Francisco.

The observation wheel will launch on April 4 and operate through March 1, 2021. It is planned for Golden Gate Park’s Music Concourse, the outdoor plaza near the de Young Museum, the California Academy of Sciences, and the Japanese Tea Garden.

“Golden Gate Park is a San Francisco treasure and a place where everybody can enjoy the best that the City has to offer,” said San Francisco Mayor London N. Breed. “We want to celebrate the park and give people a new way to appreciate the beauty of our city during this 150th anniversary celebration. This observation wheel is just the first of many exciting announcements we will be sharing in the comings months as we get ready for the coming year-long celebration.”

This will be the first time an observation wheel of this scale has operated in San Francisco since Golden Gate Park hosted the Midwinter International Exposition of 1894, where the Firth Wheel was a major attraction, standing at 120 feet and carrying 10 people per carriage.

The year-long celebration will include major events and attractions, including a free park-wide community celebration on April 4 – exactly 150 years after the California Legislature created Golden Gate Park.