Savouring The Wonders Of Australia 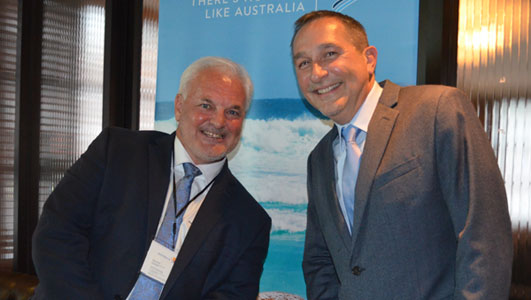 Wine and cuisine continue to lead the tourism promotions agenda for Australia, as demonstrated at a recent Australia tourism event in Vancouver. The hosts came to The Loft at Earl’s in Vancouver’s trendy Yaletown district with plenty of wine on hand to tempt attendees.

“Australia has some of the world’s best wines because we have some of the oldest vines, in ideal growing conditions,” said Robert Keddy, the head of commercial partnerships for the Americas at the Tourism Australia office in Los Angeles.

Australia has recently passed Chile as the world’s seventh largest producer of wine, said Keddy. He invited guests to sample wines from the Barossa Valley region, located north of Adelaide in Southern Australia.

Beaches are another attractive aspect of Australia that are getting time in the promotional limelight. But upcoming for 2019 and 2020 will be a focus on Australia’s amazing wildlife. Keddy noted that wildlife in a natural habitat is accessible even from the big cities of Melbourne, Adelaide and Sydney – which also offers a world famous zoo.

Canadians are some of the most loyal travellers to Australia, as about 52% of arrivals from Canada are repeat visitors, said Keddy. Canadians spend an average of about $4,900 per person, including airfare, on their visits.

Australia earned a big jump in online visibility with a series of web-based ads starring Chris Hemsworth and Danny McBride that first ran during the Superbowl this year. Web traffic increased fivefold due to visits to watch the online spots, while social media engagement grew by 12%, said Keddy.

Travel agents should watch for news of an Australia mega fam that will be operating in September or October of 2019. This fam operates every two years and welcomes qualified agents from Canada and the U.S. About 110 North American agents will be approved for the fam, including about 20 from Canada.

Michael Mullin, the VoX International account executive for Tourism Australia in western Canada (l.) and Robert Keddy, the head of commercial partnerships for the Americas at the Tourism Australia office in Los Angeles, met during a recent Australia tourism event in Vancouver.