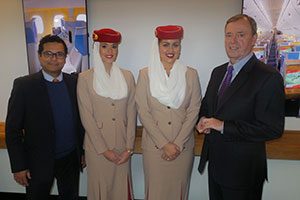 Emirates passengers clearly won’t be bar-red from enjoying some of the finer things in life while airborne.

Don McWilliam, Emirates country manager for Canada, told a Toronto gathering this week that those travelling in Premium and First Class with the carrier will find a “spectacular bar” for their use alone and Dom Perignon will be served to First Class passengers, with Emirates now being the “No. 1 purchaser of Dom Perignon in the world.”

The airline also has its own wine cellar in Burgundy.

First Class passengers are also invited to use a shower while airborne.

The United Arab Emirates carrier is now marking its 10th year in Toronto, offering three-times-a-week service that use A380 aircraft.

That plane is the “only A380 operating consistently in and out of Canada,” McWilliam said.

Those in the West are invited to use the airline’s Seattle service, with Emirates and Alaska Airlines having an interline agreement that McWilliam said passengers in Vancouver, Edmonton and Calgary can take advantage of.

McWilliam said Emirates is now seeing “really strong load factors” out of this country, and also praised its rapid growth. Emirates began operation in 1985 and now serves 157 destinations in over 80 countries, making it “the largest international carrier in the world,” he said.