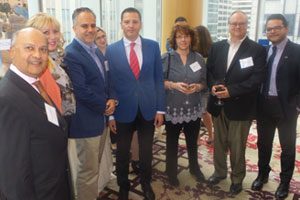 Los Cabos wants to make tourism inroads into the eastern part of this country.

Rodrigo Esponda, who oversees the Los Cabos Tourism Board, told a Tuesday Toronto gathering that his Pacific coast destination sees nonstop flights from eight Canadian cities, most of them in the West.

“We need to get more people from the East Coast… I’m sure with your help we’re going to,” he said.

Los Cabos refers to two towns, Cabo San Lucas, which often draws partiers attracted to its many bars, among them the famed Cabo Wabo, owned by American rocker Sammy Hagar, and San Jose del Cabo, the quieter of the two.

The towns are about 30 km apart.

Esponda said Los Cabos isn’t a tropical destination, being found in a desert-like setting home to mountains and which borders both the Pacific Ocean and the Sea of Cortes.

Golf helped put Los Cabos on the tourism map, with Esponda noting the destination now has 15 courses and four more are in the works.
Also found are three marinas.

Esponda added that Los Cabos now has 16,000 hotel rooms with 4,000 on the way, making it the “fastest growing [tourism] destination in Mexico.”

Among hotel brands that have recently decided to establish a Los Cabos presence are the likes of Grand Velas, Park Hyatt, Ritz-Carlton Reserve and Four Seasons.

Los Cabos is seen by some as an expensive destination, but Esponda said visitors can find hotels that are “very moderately priced.”
Pictured are Rudoph Nareen of Astor Travels; Michele Martinson of AeroMexico; Cesar Mendoza of the Mexico Tourism Board; Esponda; Monica Vidal-D’Erman and Gonz Moreno of Moreno Travel; and Cesar Alvarenga of AeroMexico.