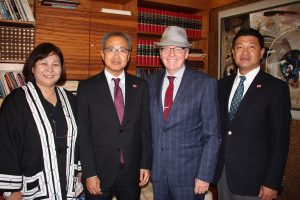 A delegation of 13 officials (including two media) from Japan’s Hokkaido region are in Canada this week promoting the northern island and its many tourist offerings.

The group, led by Yasuhiko Toda, the mayor of Shiraoi Town, Iburi District in Hokkaido, is making stops in Toronto and Montreal. Shiraoi Town is famous for its population of Ainu (aboriginal inhabitants).

Hokkaido, which is about a 1.5-hour flight from Tokyo, is known for its volcanoes, natural hot springs and ski areas. Hokkaido boasts 20% of the country’s land area, but only 5% of its population.

Also popular is The Ainu Museum, constructed in 1894, which will close next April for a major expansion and re-open in 2020 as Japan’s fourth National Museum.

While Hokkaido mainly attracts Japanese and Asian tourists, it’s hoped missions like this will increase the numbers from North America.