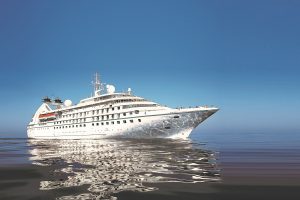 Windstar Cruises’ 212-passenger Star Pride is back in the fleet following a US$4.5 million refurbishment, including a complete renovation of two exclusive Owner’s Suites.

Also included were nautically inspired remodeling of public spaces, dining venues and more throughout the yacht.

The 2016 Star Pride transformation builds on earlier renovations now matching all guest accommodations and features of sister yachts, Star Breeze and Star Legend. Total investment in refurbishing the three yachts is over US$21.5 million in the last two years.

Star Pride sailed from Athens on June 9 embarking on a newly developed seven-day itinerary, Treasures of the Greek Isles. The classic yachters’ journey across the Aegean Sea calls at Nafplio and Mykonos, Greece; Kusadasi, Turkey; Patmos, Santorini, and Monemvasia, Greece, returning to Athens. The new itinerary has another scheduled departure on Sept. 4.

Star Pride will sail throughout the Mediterranean during the 2016 summer cruise season featuring popular cruise itineraries such as Classic Italy & the Dalmatian Coast and Glitter & Glam of the Rivieras. In October, the yacht offers an Atlantic Ocean crossing cruise and then sails a few Caribbean cruises including the Best of the ABC Islands and popular Jewels of the Windward Islands with ports less-visited. In December, the yacht transits the Panama Canal and will offer a series of Costa Rica & Panama Canal cruises into early March of 2017, when it returns to the Caribbean for three cruises prior to an ocean crossing in April.