Guardians of the Galaxy - Mission: BREAKOUT! Debuts May 27 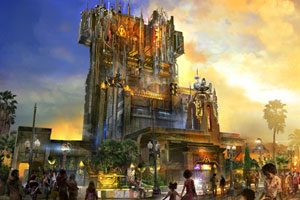 Disney California’s newest attraction – Guardians of the Galaxy – Mission: BREAKOUT! – will make its debut at Adventure Park on May 27, giving guests a chance to join legendary Super Heroes in all-new experiences through Sept. 10.

Guardians of the Galaxy will take guests through a fortress-like museum of the mysterious Collector, who is keeping his newest acquisitions, the Guardians of the Galaxy, prisoners. Guests will board a gantry lift which launches them into an adventure where they will join Rocket Raccoon in an attempt to set his fellow Guardians free.

The new adventure blasts guests straight into the “Guardians of the Galaxy” story for the first time, alongside characters from the blockbuster films and comics. As guests join Rocket in his attempt to bust his pals out, they’ll experience randomized ride experiences complete with new visual and audio effects and music inspired by the film soundtracks.

“It’s going to be a thrilling summer at the Disneyland Resort,” said David Duffy, director, Creative Entertainment. “You can celebrate the arrival of Guardians of the Galaxy – Mission BREAKOUT! and join forces with legendary Super Heroes. You can choose an awesome encounter with Star-Lord, Black Widow, Spider-Man, Hawkeye or Captain America, step up to meet Groot for the first time, and find out if you have what it takes to join the Avengers. It’s all part of the adventure with Summer of Heroes.”

Other new Summer of Heroes’ experiences include: Guardians of the Galaxy: Awesome Dance Off!; Avengers Training Initiative – Black Widow and Hawkeye assemble young recruits for a series of tests to see if they have what it takes to join the ranks of the Avengers; Heroic Encounter: Black Widow – Black Widow will arrive on the scene several times throughout the day in an armoured Avengers vehicle for her heroic encounter with park guests; Grab a Piece (or Bite) of the Action – Special themed merchandise and food will be available throughout Hollywood Land.