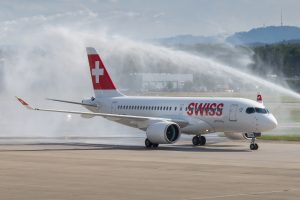 According to officials, the short- and medium-haul twin jet, named Canton of Zurich, sets new benchmarks in terms of its inflight comfort, operating economics and environmental credentials.

The first of its 30 jets on order – which are a combination of CS100s and the larger CS300 – will gradually replace the present SWISS Avro RJ100 fleet between now and mid-2017. Following that, the subsequent C Series deliveries will partly replace other aircraft types and partly permit modest fleet growth.

In SWISS configuration, the Bombardier CS100 will seat 125 passengers.

With its advanced engine technology, systems and construction materials the new twin jet sets new “benchmarks in comfort, economic and ecological terms. It is 10-15 decibels quieter than comparable aircraft types; and both its fuel consumption and its carbon dioxide emissions have been reduced by up to 25%.”

The cabin interior features large and closely spaced windows that let in more daylight and give the cabin a spacious feel.