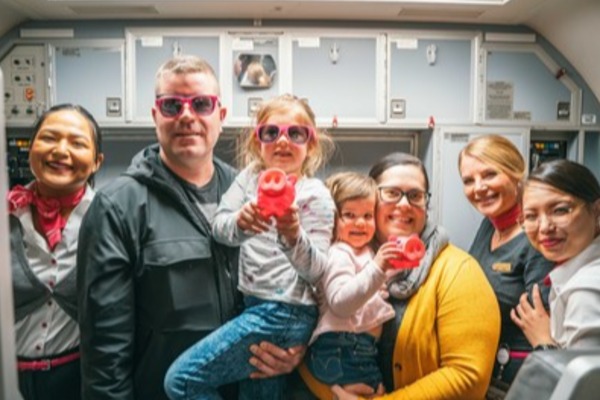 Swoop reports that it has now carried two million travellers since its first flight took off in June 2018. To mark the milestone, Swoop presented an unsuspecting guest with a round-trip flight to anywhere Swoop flies. The lucky traveller, Travis Pickering, was surprised by Swoop on-board a flight from Edmonton International Airport (EIA) to McCarran International Airport with his wife and two children.

Shane Workman, head of flight operations for Swoop, said: “Reaching this milestone of having flown two million travellers in this short timeframe affirms the need for Canadians to have affordable air travel options.”

Workman continued: “Swoop is humbled for the opportunity to be part of so many Canadians’ travel plans. Whether they were travelling to visit family, take a vacation or for business, we are honoured that Swoop has been the airline of choice for two million travellers.”

Since its launch, Swoop’s network has grown to serve 14 domestic, 10 transborder and four international markets, rapidly expanding the airline’s network across North America.

In addition to the round-trip flight giveaway, Swoop also provided all travellers on the flight from Edmonton to Las Vegas with cookies, champagne and some fun Swoop swag.

Check out the video of the presentation at https://youtu.be/vbet2z1-xag .

And for more on Swoop, go to www.FlySwoop.com .