Take Off With Ethiopian Airlines 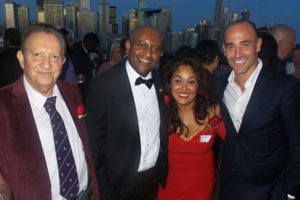 Ethiopian Airlines says people can feel on top of the world while in CloudNine.
The carrier – marking five years of direct service between Toronto and Addis Ababa – held a Toronto event Thursday evening, touting the carrier as the best option for travel between this country and the African continent.
“We are pretty confident about the Canadian market,” Rahel Assefa, the carrier’s vice-president of marketing, told Press Today.
The Star Alliance carrier – which labels its business class service CloudNine and calls its frequent flyer program Beersheba, a name straight from Ethiopia’s long history – plans to up its service from three weekly Toronto flights to five on Nov. 1.
Edward Radonic of radonicrodgersstrategy – a marketing firm that works with the carrier – said Ethiopian Airlines had been seeing load factors of around 70% but those load factors are now topping 90% and sometimes reaching 100%.
Ethiopian Airlines, which celebrated its 70th anniversary last year, flies to some 54 destinations in over 50 African countries, giving it an unequaled African network, said Birhan Abate, its area manager for Canada.
Airline officials note that passengers can choose between Western and Ethiopian food and flight attendants wear Ethiopian-style dress.
Abate said the direct service makes his airline particularly practical for those planning to visit Africa, enabling them to bypass European connections, thereby saving time and money.
Abate praised Ethiopia as a great tourism destination, citing wildlife that includes some 3,000 bird species and large mammals such as elephants and giraffes, and a long history that includes many ancient churches in the predominantly Christian country.
Tourism officials and many archeologists also believe that the fabled Arc of the Covenant is buried in Ethiopia, another testament to the country’s long past.
The country has long been a distance running powerhouse, routinely producing Olympic medalists, and foreigner running enthusiasts can train at camps given by elite Ethiopian runners.
Among those who praised Ethiopia and Ethiopian Airlines last night was celebrity chef David Rocco, who travelled to the country with the carrier and thanked it for its “fantastic service.”
Seen here are Abate (second from left) and Rocco (r). Also with them is Roger Boyajian of Sevan Travel in Toronto.
Go to http://www.ethiopianairlines.ca for more.