Home › Destinations › The Quack Is Back

The Quack Is Back 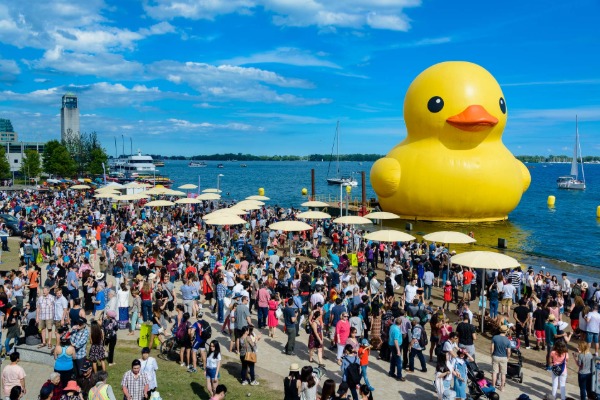 On the occasion of National Rubber Ducky Day, the Redpath Waterfront Festival (RWF), presented by Billy Bishop Airport, has announced that the World’s Largest Rubber Duck will be returning to Toronto’s Waterfront.

The festival is bringing back Mama Duck, who is six stories tall and weighs 30,000 pounds, to celebrate the 10th anniversary of the festival, which this year is taking place from June 19 to June 21, 2020.

In 2017, the World’s Largest Rubber Duck made a splash in Toronto when it floated in to celebrate Canada’s 150th anniversary at the waterfront festival. Drawn to the Duck, more than 750,000 people attended the three-day celebration and the festival generated an estimated $7.6 million in economic impact for the city of Toronto.

Currie continued: “In the years since, we have received countless comments and inquiries asking when the Duck will return. With our 10th anniversary this year, it was obvious that we needed to bring the Duck back to re-capture the magic and thank our visitors for their ongoing support of the festival.”

The costs associated with bringing the Duck back this year will be paid through the Redpath Waterfront Festival’s operating budget and not through grants or government funds.

Key highlights from the 2017 Redpath Waterfront Festival as a result of Mama Duck:

!!! 75% of visitors said the Duck was the main reason for them attending

Go to www.towaterfrontfest.com for more.