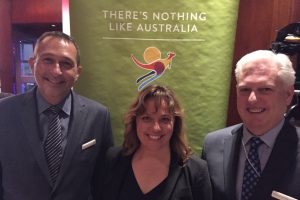 The spotlight was on Australia last night (Sept. 29) as Tourism Australia officials held an industry event at Proof Lounge in Toronto to update travel agents and suppliers on all things new Down Under.

With Canadian arrival numbers to Australia on the rise, Robert Keddy, head of commercial partnerships, The Americas, for Tourism Australia, thanked the partners on hand. Numbers were up 1.7% for the last 12 months ending in July, and a whopping 17% in July itself, thanks in part to new Air Canada-Brisbane service.

Key campaign pillars for the upcoming tourism season are food and wine and aquatic and coastal – with “opportunities both above and below the water” – followed by indigenous, events, business travel and luxury.

“Australia is not just a place you see, it’s a place you feel,” said Lisa Wooldridge, director of marketing, The Americas, for Tourism Australia. “It gets under your skin.”

Agents were reminded of the organization’s Aussie Specialist program, which is described as fun and educational and can be completed at your own leisure.

Pictured at the event are (l-r) Keddy, Wooldridge and Paul Larcher of VoX International, which reps Tourism Australia in Canada. 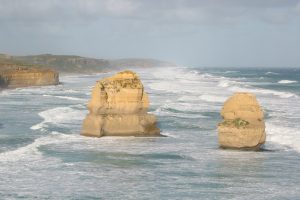