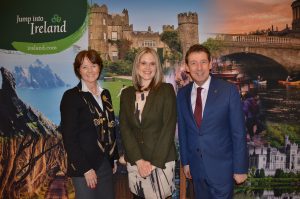 Following stops in Vancouver, Calgary and Edmonton, the Tourism Ireland road show rolled into Toronto last night (Feb. 23) with Canadian and Irish partners on hand for a workshop event for the travel trade focusing on groups – along with live music and Irish delights.

“It’s an opportunity for us to get out and chat with the agents and educate them on what’s new and exciting for Ireland in 2017,” says Dana Welch, Marketing Manager, Tourism Ireland. “It’s been really positive, we’ve had really strong turnout and great engagement.”

Over the past three years, Ireland has noted a 56% growth in Canadian arrivals, and ended 2016 with a record-breaking 210,000 plus visitors from Canada.

“Tourism for the island of Ireland has been the best ever on record – ever, ever,” adds Shane Clarke, Director of Corporate Services, Tourism Ireland. “2016 saw a total of about 10.5 million people visiting and they generated over $5 billion in terms of revenue.”

Breaking the 200,000 visitor mark for the first time, Alison Metcalfe, Head of North America at Tourism Ireland says Canadians are now a top-10 feeder market for the destination.

“This is the first time we’ve been in Alberta, it’s honestly a nation-wide road show and it reflects the fact that we’ve seen lots of increase in direct air access,” she says. “We now have direct service from Vancouver so it’s an opportunity to expand our business in Western Canada, we’re beginning to see some really good results.”