Trafalgar Commemorates the End of the First World War 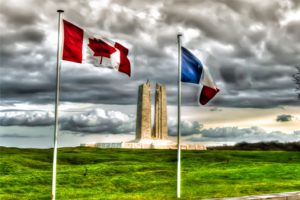 As Remembrance Day approaches, 2018 will be a historically significant year Canada as we not only honour those 650,000 Canadian men and women who served and fought in The Great War, but also commemorate the end of the war. Trafalgar invites Canadian travellers to join them on an immersive journey to the most poignant battlefields and monuments in southern Britain, northern France, Belgium and the Netherlands.

On the 12-Day WWI & WWII Battlefields, Trafalgar takes guests beyond the expected to explore the important military sites and cultural history of Europe.

“2018 will mark the 100th anniversary of the end of World War I, where more than 66,000 brave Canadians made the ultimate sacrifice and citizens from across the globe will be heading to these historical military places to take part in these remembrance memorials,” said Wolf Paunic, president of Trafalgar Canada. “2017 also marked the 100th anniversaries of the historical World War I battles of Vimy Ridge and Passchendaele and there is a heightened interest in our comprehensive battlefields itinerary which gives Canadians the opportunity to pay their respects at the most significant military sites in Europe.”

As part of Trafalgar’s “Special Interest” travel style, the WWI & WWII Battlefields itinerary takes clients to the wars’ most significant monuments, memorials and museums through Britain, France, Belgium and the Netherlands. Starting in London and ending in Amsterdam, the trip stops in Caen, Amiens, Paris, Lilles and includes day trips to Somme, Ypres, Portsmouth and more. Guests will visit the significant Somme Battlefields, where the Canadians Corps gained a notable reputation as first-rate front-line troops who made the made the ultimate sacrifice with the loss of more than 24,000 courageous soldiers.

Clients will also get the opportunity to pay their respects to their brave countrymen and women when exploring the World War I site of Vimy Ridge which came to symbolize Canada’s coming of age as a nation. The 250-acre park surrounding the Canadian National Vimy Memorial has 11,285 Canadian shrubs and trees to commemorate the soldiers who went missing in action. On an excursion to Ypres, clients will also stop in Passchendaele to visit the museum and see a replica trench where 100,000 Canadians bravely fought for victory and nine of our soldiers were awarded the Victoria Cross. Guests then visit Essex Farm Cemetery where Canadian John McCrae wrote his immortal Great War poem “In Flanders Fields.”

Other highlights include a visit to the historic D-Day Normandy landing beaches, Dunkirk and a special Be My Guest farewell dinner of Dutch cuisine with the Pauw family at their dairy farm just outside of Amsterdam.
Clients can take advantage of Trafalgar’s Early Payment Discount of 10% off the cost of 2018 Europe & Britain guided vacations, when the trip is booked and paid in full by Jan. 11.