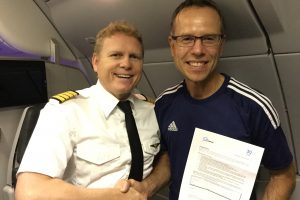 This past Tuesday (Nov. 14), 21 Air Transat passengers landed in seventh heaven when they won a pair of tickets to fly to any of the carrier’s destinations, following a random draw held that day aboard all 21 Air Transat flights out of Montreal, Toronto and Vancouver, as well as several European cities.

The surprise draw was a way to mark the anniversary date of Air Transat’s inaugural flight – on Nov. 14, 1987, Transat welcomed its first 360 travellers from Montreal aboard a Lockheed L-1011 bound for Acapulco, Mexico.

A few days earlier, Transat unveiled new livery for its fleet in front of 375 tourism and business partners and guests.