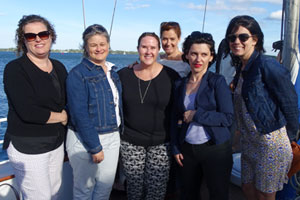 Croatia is famous for its sailing, but short of transporting a couple dozen members of the trade to the Dalmation coast, Transat made do with an excursion on Toronto harbour last night to tout the introduction of 2016 seasonal service to Zagreb, which begins June 14 from Toronto and runs through Oct. 4.

“Consumers are asking for something and we’re delivering it,” said Transat business development rep. Susan Kooiman.

In addition to the flights, Transat has a full suite of Croatia product including the all-encompassing Treasures of Transat coach tour as well as a self-drive package, cruising in the Dalmation islands, hotels, excursions and more.

Ivana Crnic, Croatia’s consul in Canada, welcomed the new service and promised that her country would not disappoint Canadian visitors.