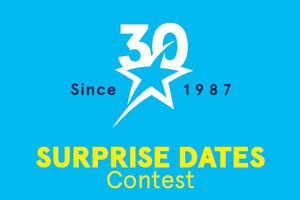 Transat has announced the names of its second winners for its “Surprise Dates Contest,” part of the company’s 30th anniversary celebrations. They are: Diana Fournier of Glenny Travel Ltd. in Fort Erie, Ont. (Ontario-Atlantic), Kathy Hannah of Roblin Travel Service Ltd. in Chilliwack, BC (Western Canada) and Charlotte Ringeard of CAA Voyages in Quebec City (Quebec).

To mark its 30th anniversary, Transat will draw at random a total of 30 surprise trips for two this year – three each month through November – from among eligible travel consultants in three Canadian regions: Quebec, Ontario-Atlantic and Western Canada.

The draws are being held on predetermined (but secret) milestone dates in Transat’s history. Contest entry is automatic as soon as an agent anywhere in Canada sells a Transat flight, package or cruise on the surprise day.