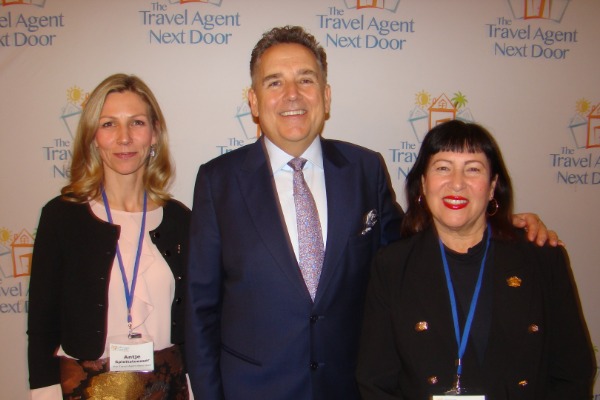 Handshakes. Hugs. Lots and lots and lots of laughter. In fact, you’d think the pandemic had never happened.

That was the atmosphere last night (Nov. 23) as The Travel Agent Next Door (TTAND) welcomed about 90 guests to its Annual VIP Supplier Event – an event that has become a harbinger of the Christmas season – at Toronto’s Fairmont Royal York.

TTAND founder, Flemming Friisdahl was clearly pleased to welcome the agency group’s supplier partners after a ‘tough’ three years and update them on how TTAND has fared through some dark times.

TTAND’s executive team – Friisdahl; Rhonda Stanley; Penny Martin; Adina Finatan; Nicola Gowe; and the newest member, Antje Splettstoesser – was out in full force, along with the rest of its Canadian team.

Friisdahl told his audience that TTAND has shown ‘steady’ and ‘consistent’ growth since its launch in 2014 when it launched with 60 agents, three staff members and produced $7 million in sales.

The group has also formed a new partnership with Travel Leaders Network (TLN) a move supported by 96.4% of TTAND’s members and one that Friisdahl said “has been a win for us.”

Along with Friisdahl’s update on all things TTAND, Director of Marketing, Antje Splettstoesser and Vice President, Travel Agent Experience, Penny Martin offered some insight on the group’s initiatives in both of those areas of its business.

As for the pandemic, Friisdahl made it clear that as a group, TTAND has ‘weathered the pandemic together,’ noting that it had held more than 250 Zoom meeting to update members on a host of topics; it had supported meetings with 20 MPs and MPPs; it had supported 54 families over the holidays with gifts, meals and emotional support; and, remarkably, it welcomed 450 new member agents during that time.

Looking ahead to 2023, Friisdahl is expecting to see the group’s agency members hit the 1,200 mark; staff will increase to 50; and sales are expected to reach $305-milllion ‘at a minimum.’

Stay tuned … 2023 is going to be an interesting year for The Travel Agent Next Door.