TTC Offers A Taste Of Thailand 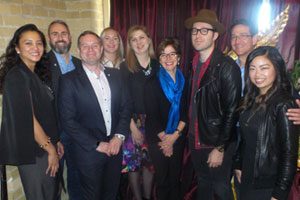 Those visiting Thailand can have good pad Thai in a good Thai pad.

Kayla Shubert of the TAT’s Canadian office told those attending that Bangkok is famed for its street food but is also seeing a growing upscale tourism infrastructure that includes popular rooftop dining options.

The city is also known for its many upscale hotels.

Shubert conceded that visitors might initially find Bangkok overwhelming but added she can guarantee that they’ll “fall in love with the city.”

Bangkok has a distinctly modern side but rural areas around Chiang Rai can have visitors feeling like they’re “stepping back in time,” she continued.

Several The Travel Corporation brands – including Trafalgar, Busabout and Contiki – have Thailand itineraries.

The event featured chef Dennis Prescott, who has just released a cookbook, Eat Delicious.
Jeff Element, who oversees The Travel Corporation’s Canadian operation, said food can be an integral part of a vacation.

“What better way to learn about a culture than through its food?” he asked.

Meanwhile, Shubert reported that Thailand last year hosted 244,268 Canadians, a 7.3% increase, adding the nation is a particularly diverse part of the world.

“No matter how many times you go, you are guaranteed to see something new,” she said