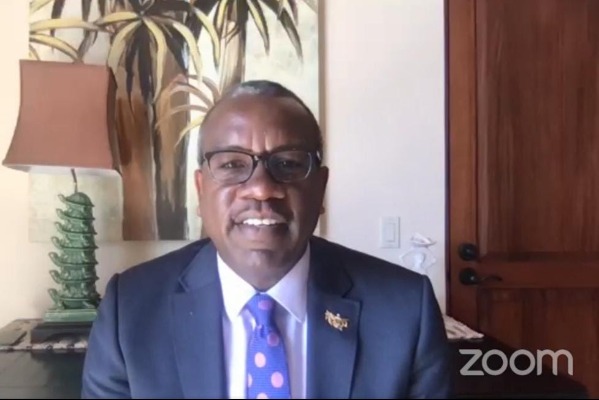 The governor of the U.S. Virgin Islands, Albert Bryan Jr. believes that pre-departure testing at mainland U.S. airports as well as increased adherence to public health protocols would bolster the efficacy of efforts to contain the spread of Coronavirus Disease 2019 (COVID-19) both locally and throughout the Caribbean.

Reporting on meetings held recently with St. Lucia Prime Minister Allen Chastanet, the Governor said they agreed on the need for the rollout of rapid test technology to protect Caribbean visitors and residents.

At the same time, the two leaders lamented the fact that COVID-19 has so far led to the deaths of more than 150,000 people in the United States alone, but effective, universal travel protocols have yet to be put in place to contain the pandemic.

The Territory’s chief executive said he welcomed conversations with other Caribbean heads of government to consider standardized public health protocols, observing that: “We have a real symbiotic relationship here in the Caribbean and it looks like we are going to work closer together to take care of Caribbean tourism.”

Recent increases in community spread in the USVI are being attributed to asymptomatic Virgin Islanders who live and work abroad returning for family events and unknowingly infecting friends and family members in close-knit communities, particularly on St. Thomas.

Governor Bryan noted that while the overwhelming majority of residents have been complying with the Territory’s pandemic protocols and guidelines, “familiarity lessens [adherence to] restrictions”, and he reported stronger communications tactics will be deployed to remind residents the pandemic “does not take prisoners”.

While a significant portion of the tourism sector has not fully reopened since the 2017 hurricanes, the Governor said that the closures have given resorts time to upgrade, refurbish and refresh their properties. In fact, prior to the pandemic, the USVI’s tourism sector had been recovering well with hotel bookings and villa and charter rentals “going through the roof.”

Tax abatements and other economic incentives have also boosted investment interest in the private sector while the government completes infrastructural projects to enhance the attractiveness of the Territory and make it easier to travel around the islands.

With an uptick in positive COVID-19 cases in prisons and senior citizen residential facilities, every effort is being made to increase rapid testing, including testing at airports and throughout the community as the destination counts down to its planned reopening to leisure travelers in mid-September.

The Territory’s earlier problems with the availability and expense of needed equipment have been addressed successfully, and the price of testing has been reduced from $150 to somewhere between $30 and $50.

The Governor said the islands’ current month-long pause on welcoming leisure visitors will be used to strengthen existing containment measures and to invite U.S. stateside doctors and nurses to share their expertise and tithe their time at local medical facilities.

Despite his optimistic outlook and expectation of recovery for anyone who contracts the virus, Governor Bryan expressed his personal sorrow over every new case detected, whether in the U.S. Virgin Islands, the Caribbean or anywhere in the world.

Along with Governor Bryan, the Caribbean Hotel and Tourism Association event was hosted by Frank Comito, CEO and Director General of the CHTA.