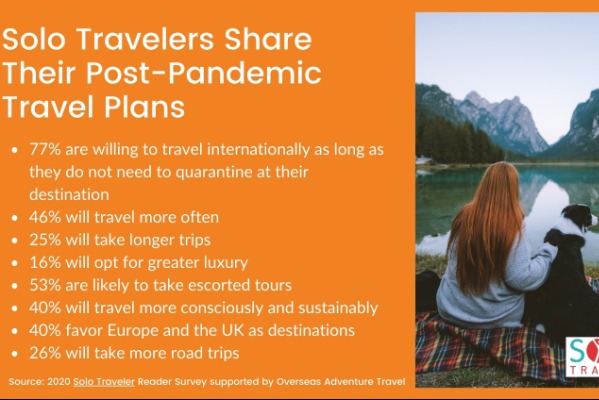 Solo travellers are forging ahead with plans to travel more often and more sustainably amidst a backdrop of COVID-fueled travel restrictions.

In its 8th annual survey, Solo Traveler, polled close to 3,000 respondents regarding solo travel and the Coronavirus, and those surveyed made it clear that they have the desire, the financial means, and intentions for their return to both domestic and international travel.

Solo Traveler’s Janice Waugh observed that: “The response to this year’s survey was overwhelming. We received more than double the responses compared to previous years with 80% of the respondents being women. This demonstrates a huge pent-up desire for travel.”

Brian FitzGerald, CEO and president of Overseas Adventure Travel – which supported the survey – noted that: “Solo travellers are by nature independent and bold, and that’s reflected in their need to get back out into the world.”

And FitzGerald continued: “Solo travellers are also telling us how important it is to make travel sustainable and supportive of local communities. They don’t simply want to see the world – they want to shape it too.”

Sixty-one percent (61%) said they would travel internationally once a vaccine is available.

Respondents also revealed that travel will take a higher priority than before.

Survey results also suggested that many solo travelers will spend more on travel than they have in the past. Fortunately, the majority of solo travellers continue to have the financial means to fulfill their travel desires.

Seventy-one percent (71%) of respondents overall reported that the pandemic has had no impact on their financial ability to travel, while 14% noted they now have more money and 15% reported having less.

It should also be noted that respondents over 45 years of age are in a better financial position than those under age 44. However, overall, 43% of respondents indicated that they will set a new priority for travel in their personal budgets.

And the survey also revealed that: