Unplug And Recharge With Club Med 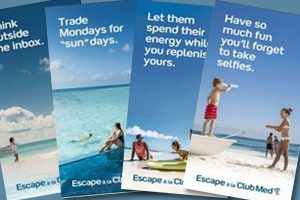 With the days getting shorter and many feeling the effects of less sunshine, Club Med is rolling out its campaign to counteract the arrival of winter in Canada, at a time when numerous households are planning their holidays for the coming months.

Under the “Unplug to recharge” banner, Club Med is rolling out its new campaign in three areas. Montreal, where a large number of Club Med clients live, will be covered by various high-impact media such as superboards or placements in the downtown core.

Montreal’s English-speaking population will be targeted by an unprecedented radio campaign as part of the company’s efforts to connect with English-speaking clients in Quebec’s largest metropolitan centre.

In Toronto, it is continuing its development strategy. As part of its plan to educate people on the Club Med brand, which is not as well-known in Ontario as in Quebec, immersive and innovative visuals using cinematographs will be placed in symbolic high-traffic locations, such as the digital display networks at the Billy Bishop Toronto City Airport and Union Station.

The end of the year is a peak period for Club Med media investments. The “Unplug to recharge” campaign will focus on developing the Club Med brand name among targeted clients looking for holidays that are both active and relaxing.

Amélie Brouhard, Club Med’s marketing and communication director for Canada, explained, “November is a key month for the development of our brand presence in our main Quebec markets as well as in Ontario. We’re thrilled to see that year after year, Club Med’s business continues to grow, partly as a result of such media plans. The choice of the right holiday destination is increasingly important to our hard-working client base. With its light, offbeat tone, this campaign reflects the busy daily lives our clients are leaving behind to immerse themselves in our magnificent Club Med Villages.”

For more, agents can go to http://www.clubmedagents.ca.