Home › Destinations › On The Road With The NHL

On The Road With The NHL 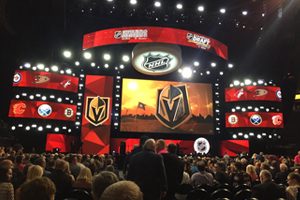 With much fanfare and a who’s who of the National Hockey League, Las Vegas hosted the NHL Awards last night (June 21), as well as the expansion draft for the new Vegas Golden Knights, who begin play next season, reports Press Today’s Greg Coates, who was on hand for the stellar event.

In fact, as you can see in the photo, Coates got the chance to meet  Montreal Canadiens’ goaltender, Carey Price, during the awards ceremonies.

The event was held at a packed T-Mobile Arena, located just off The Strip in Las Vegas, and aired live on television.

Canada was certainly well represented at the event with many fans donning their favourite team’s jerseys and flying in for the awards ceremony.

It’s a concept Vegas tourism officials hope will continue with fans heading south to see their teams in action against the Golden Knights.

Gary Bettman, commissioner of the NHL, said the NHL is proud to call Las Vegas “home,” and noted the addition of NHL hockey serves as yet another attraction for a world-class city that knows, very well, how to shine the spotlight on outstanding performers and great moments.