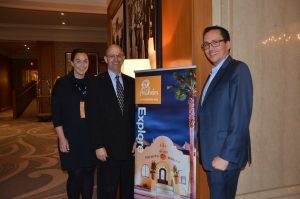 Charles Harris is inviting travel agents to rediscover what they know or think they know about Anaheim.

While the destination, which saw a 6.6% growth in international tourism, including 517,838 Canadian visitors in 2015, is often associated with Disneyland, the senior vice-president of marketing for Visit Anaheim says there’s much more for clients to see, do and experience.

“Everybody knows Disney is a core of what we do but there’s a lot more,” he says. “There’s lots of great things going on from the Packing House to our craft brew industry and authentic dining. The beaches are only a 20-minute drive from us… to experience the coastline that is Orange County. If you want to do some things that are different you can have a circus experience, there’s escape rooms. I’d be remissed if I didn’t mention hockey.”

The Visit Anaheim Road Show, which rolled into Toronto yesterday (Nov. 14), is also making stops in Edmonton, Calgary and Vancouver with a mix of travel agent and consumer events.

“Canada is a very important market to us – it’s a top three market for us – and so we need to reinforce, educate and inspire both the travel agents and consumers about our destination,” he told PressToday. “That’s why we’re spending time in four different cities and helping to tell that story of what’s new and what’s going on and what’s great about Anaheim and Orange County.”

As for what’s underway in the destination: