Welcome To The Broadview Hotel

Local East End Culture With A Hint Of Old-World Grace 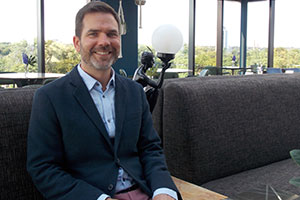 The Broadview Hotel welcomed a select group of travel trade types to enjoy an evening on its newly opened Rooftop Lounge, take a tour of a selection of some of its 58 rooms and learn more about the upscale boutique property located at Broadview Ave. and Queen Street in Toronto’s trendy Riverside neighbourhood.

Murray Henderson, general manager of The Broadview Hotel, explained that the hotel is now doing a soft opening, but has already welcomed its first guest as of July 6.

A partnership between Streetcar Developments and Dream Unlimited, the property currently features a lobby bar and cafe, with a restaurant – The Civic – set to open later this summer.

It also has 3,000 square feet of meeting space and its newly opened Rooftop lounge for hosting events.

Behind The Broadview Hotel’s 126-year-old, explained Henderson, is a brand new hotel with some nifty in-room features.

Right now, The Broadview Hotel is using social media and its web site for reservations, but Henderson (seen in the photo) said that the property will be rolling out a plan to work with agents some time in the coming months.

For more, go to http://www.TheBroadviewHotel.ca or better still, check it out.