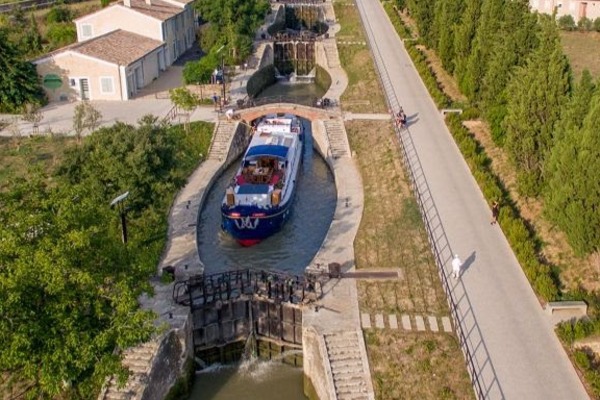 After months at home, travellers are looking at less crowded destinations where they can safely social distance. UNESCO World Heritage sites are a great option, since many are natural attractions that can be enjoyed in the fresh, open air. European Waterways takes guests to some of the top UNESCO sites in Europe aboard their fleet of luxury hotel barges, offering the opportunity to see these wonders “up close and in person.”

These include such famous attractions as France’s grand Canal du Midi – a masterpiece of hydraulic and structural engineering and one of the greatest constructions of the 17th century.

Originally used for transporting wheat, wine and textiles, the Canal du Midi fell into neglect for over 100 years with the introduction of the railroad.  It enjoyed a renaissance as a popular tourist destination in the 1980s and 1990s thanks, in part, to barging visionaries such as European Waterways, which introduced travelers to its beauty, natural charm and engineering brilliance.

Derek Banks, managing director of European Waterways, said: “Among the many UNESCO sites that are literary part of the ‘great outdoors,’ the Canal du Midi is in a class by itself. We are pleased to have played a part in making it one of France’s most popular destinations, introducing travelers from all over the world to the fascinating and historically rich countryside surrounding it.”

Four of European Waterways’ luxury barges cruise various lengths of the Canal du Midi, which stretches 224 miles through picturesque countryside and sleepy villages to connect the Atlantic Ocean with the Mediterranean Sea.

For more, go to www.europeanwaterways.com .