Home › Airlines › EXCLUSIVE – Beyond The AD75

EXCLUSIVE – Beyond The AD75 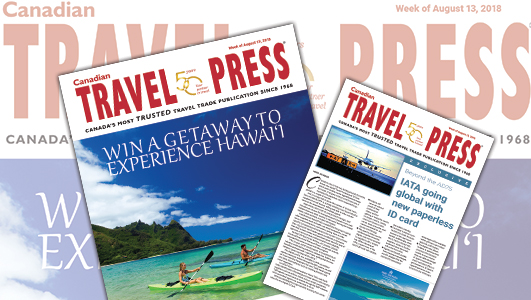 Canada is one of only two testing grounds for IATA’s brand-new digital Travel Professional ID Card, which went mobile via the AgentExperience app last week. If all goes without a hitch here and in Australia, the paperless card is expected to go global in a couple of months, reports Quebec editor, Mike Dunbar in this week’s digital edition of Canadian Travel Press.

And, in a major bid to boost the number of ID Card members worldwide, IATA is actively enlisting more travel industry suppliers from all sectors willing and able to offer concessions to the association’s accredited agents.

Inigo Prieto, IATA’s T&T ID card product manager, said Canada was chosen for testing because it boasts more cardholders than any other country in the world, barring the United States, while Australia occupies third place.

And Montreal-based Prieto revealed that his group is going after suppliers such as hotels, car rental companies, cruise lines, tourist attractions and others, asking them to offer specific concessionary incentives to the current crop of more than 125,000 ID Card holder agents worldwide on the basis that they’ve been vetted and have been given the IATA seal of approval in terms of their professionalism and reliability.

He told CTP that Porter Airlines, Air Canada, Orlando Universal Resort and Premium Plaza Lounge had recently indicated they were on board with the program.

“The 20-year-old ID Card program is recognized as an industry credential by airlines to validate that holders are bona-fide professionals,” said Prieto, adding that the new initiative “goes way beyond the AD75.”

The digital card is now available to IATA-accredited agents issuing air tickets through the BSP system as well as Travel Industry Designator Service (TIDS) travel agents and sales intermediaries such as meeting planners and event organizers.