Big Things Happening In The Bahamas 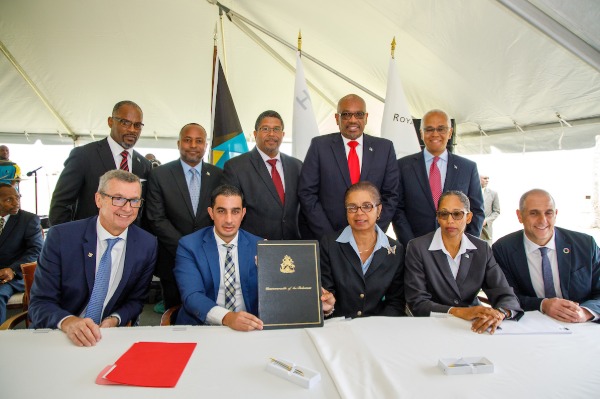 Holistica Destinations — a new joint venture between Royal Caribbean Cruises Ltd. and privately held ITM Group — has announced its first major project in The Bahamas: a development in Freeport, Grand Bahama with an initial investment of $300 million.

The venture spans two locations including the enhancement and expansion of the port terminal, to be called Harbour Village, and the Lucaya Property, which will be situated at the current Grand Lucayan resort. The project includes plans for employment, job training, community investment and sustainable construction practices.

Shamosh continued, “Our overall vision for this new endeavour is a long-term relationship with the community and the government of The Bahamas; essentially a marriage where we will grow together in prosperity welcoming millions of visitors to the destination for years to come.”

The first phase of the Lucaya Property will be a beachfront destination with a 526-room hotel, shopping village, spa and wellness centre, water-based family entertainment including a massive water and adventure theme park, a 40,000-square-foot convention centre, adventure activities such as zip lines and off-roading, restaurants and bars, entertainment and nightlife. T

Harbour Village will be nine miles west of the Lucaya Property, at the cruise terminal in Freeport Harbor. Here, visitors will be able to enjoy numerous spaces with multiple shopping and dining venues, beach areas, shore excursions and more. There will also be engaging activities for visitors to experience.

Michael Bayley, president and CEO of Royal Caribbean International, said of the new venture, “Great destinations are a vitally important part of the recipe to deliver unforgettable cruise vacations. With our partnership in Holistica Destinations, we believe that this new development will create a world-class experience for guests and deliver renewed hope for the rebirth of Grand Bahama.”

Bayley continued, “We thank the government of The Bahamas for its continued partnership and shared vision to create a premier attraction which will be a catalyst for economic growth in the destination.”

Mauricio Hamui of ITM Group said the capacity for the harbour will be vastly expanded, “By the time we are finished in the winter of 2022, the port will be ready to host the largest cruise ships in the world.”

With the participation of Bahamian companies, development plans for Freeport also include a multi-modal transportation hub with infrastructure for water ferries and ground transportation including buses, vans and jeeps.

Holistica Destinations will work closely with local business owners and entrepreneurs as partners with opportunities both at Harbour Village and the Lucaya Property as well as additional shore excursions in Grand Bahama.

A May 2019 study by Tourism Economics, an Oxford Economics company, indicated that over a 22-year projection timeline, there would be a B$9.1 billion increase in Bahamian GDP as a result of this project. Additionally, the project anticipates creating 3,000 direct jobs during peak construction and operation periods. Once the development is completed, Grand Bahama should expect to welcome more than two million travellers annually.

“We thank Holistica Destinations for investing in Grand Bahama,” said Prime Minister, Dr. Hubert Minnis. “This project will result in employment, business and entrepreneurial opportunities for the residents of Grand Bahama.”

Go to www.holisticadestinations.com for more.