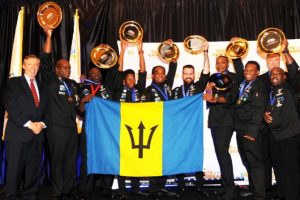 Barbados is the Caribbean National Culinary Team of the Year.

The Bajan team won the top honours in the finale of the 2017 Taste of the Caribbean culinary competition at the Hyatt Regency in Miami recently, after also bagging individual honours for Ryan Adamson, Caribbean Bartender of the Year, and Damian Leach for Seafood.

“We really applaud all these Taste of the Caribbean participants, their national hotel and tourism associations, team managers and sponsors for developing 14 astounding Caribbean national teams to compete at this event,” said Frank Comito, director general and CEO of the Caribbean Hotel and Tourism Association (CHTA). “The teams’ commitment to the region showed in the heart and soul that each of the participants invested in their presentations.”