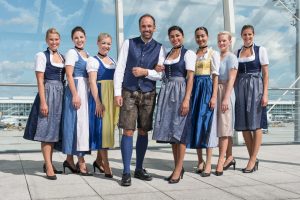 Lufthansa crew wore special anniversary attire on some of its routes recently, including Munich to Toronto, to mark the 10th anniversary of the airline’s celebrated dirndl crew.

Since 2006, this special crew has flown to a total of 20 destinations on four continents. Two days prior to the beginning of this year’s Munich Oktoberfest, Lufthansa passengers were once again able to experience this Bavarian tradition up in the clouds.

Over the past 10 years, both the design of the costumes, as well as the designers, has changed. In fact, throughout the years, the dirndl’s originated from three varying fashion houses. What does remain the same, however, are the Lufthansa colours of yellow, blue and white which adorn the outfits. Lufthansa’s Oktoberfest dirndl is dark blue with a silver-grey pinafore. The men wear knee-length lederhosen with a dark blue waistcoat in the same fabric as the dirndls.