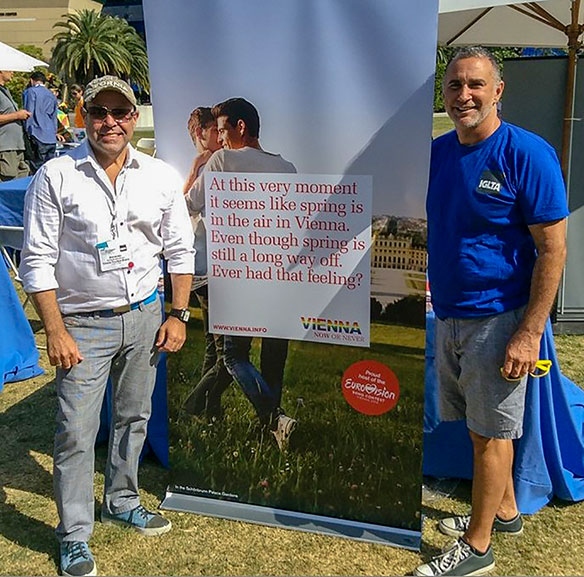 (Photo above: Armando Mendonça and John Tanzella, president & CEO, IGLTA at the IGLTA Conference in Los Angeles in 2015)

My first IGLTA Conference was in 1989 in Vancouver during my tenure at Canadian Holidays. It was at a time when LGBT discrimination was palpable, and the pink dollar had no value. But how times have changed as the IGLTA Conference prepares to celebrate its 35 years at its upcoming conference in Toronto – May 9 to May 12, 2018.
So, in this week’s issue of CTP, I sit down and talk to IGLTA’s president and CEO, John Tanzella.

Mendonça: It’s important to look back and see how far we’ve come – when did you know that IGLTA was here to stay?

Tanzella: I would say there are two moments worth mentioning. One was when we first started getting corporations to recognize the importance of LGBTQ travellers and become members of IGLTA, which happened about eight years ago. I knew at that point we were here to stay. But there was a second memorable point, when we launched the IGLTA Foundation, enabling us to help LGBTQ-welcoming businesses in emerging destinations and LGBTQ tourism students. It was a chance to give back and do some really great things to support those in places where LGBTQ tourism is much more challenging than in the US and Canada.

Mendonça: How has IGLTA impacted the LGBT global travel community aside from providing networking platforms?

Tanzella: The association has helped to expand the discussion of LGBTQ tourism to governments and tourism bureaus that were unfamiliar or reluctant to associate with the market. We’ve created partnerships with some of the most important organizations in global tourism, such as UNWTO, the Pacific Asia Travel Association (PATA), the Brazilian Tour Operators Association (BRAZTOA) and the European Travel Commission (ETC), providing education and resources to their members in the process.
We’re especially proud to have produced two editions of the Global Report on LGBT Tourism with the UNWTO. Our members not only reach out to us for marketing and networking, but also for support when they are facing anti-LGBTQ initiatives in their cities, states or regions.
We champion LGBTQ-welcoming businesses, no matter where they are located, and now have members in more than 75 countries.

Mendonça: The IGLTA Foundation was founded in 2012. Share with our readers some insight about the foundation and “Voyage.”

Tanzella: The IGLTA Foundation focuses on three main areas: research, education and the development of future LGBTQ tourism professionals.
The IGLTA Foundation was key in funding the second UNWTO report, released in May 2017 and is now working with ETC on an LGBTQ European-based research project.
The Foundation also provides funds for small LGBTQ business owners and hospitality students to attend our Annual Global Convention for education and mentorship. We’ve had scholarship recipients from around the globe, including South Africa, Curaçao, China, Japan, Norway, Colombia, and Jamaica. We traditionally host a fundraising reception for IGLTAF during our convention, but this year we’ve created Voyage, a much more elaborate event at the Fairmont Royal York, to better engage the local community. This elegant evening will include a networking dinner with surprise guests, a silent auction with fabulous travel packages and presentation of the IGLTA Honors to salute those who have improved the landscape of LGBTQ tourism. Your very own Rainbow Railroad, headquartered in Toronto, will receive our Pathfinder Award for their incredible efforts to help LGBTQ people escape persecution and violence.

Mendonça: If there’s any interest from our readers to become a member, what advice would you give them before joining?

Tanzella: Think about why you want to get into the LGBTQ market and what you hope to gain from being a part of the association. We always say an IGLTA membership is like a gym membership. Just having it won’t help your business grow, you have to actually put it to use. We have many free marketing tools to help our members reach consumers and network with other businesses, but they have to take advantage of them. Getting engaged with your local LGBTQ community is also a good way to develop authentic messaging and to better understand the market.

Mendonça: As I mentioned earlier, IGLTA is celebrating its 35th anniversary and returning to Toronto – the first time since 2009 – what are your expectations?

Tanzella: Toronto is one of the most LGBTQ-welcoming cities in the world, so we’re really excited to be back. The tourism office has been incredibly generous in its support, so we know it will be a great event. Our opening party is at Ripley’s Aquarium of Canada. Our conventions attract businesses from more than 30 countries, but we always see an uptick in engagement from the host country, and so we hope that trend continues, and there are many Canadians taking advantage of the global networking and education that IGLTA is bringing right to their doorstep.

Mendonça: John, now it’s your chance to ask me a question or two – so go for it.

Tanzella: I know you’re planning to attend, Armando. What part of the IGLTA Annual Global Convention in Toronto are you most excited about?

Mendonça: I must say it’s always exciting to meet new IGLTA members who are passionate and share their experiences and prospective, as it relates to the LGBT market in a mainstream agenda.

Tanzella: As someone who has already participated in several IGLTA conventions, what advice would you give to people attending for the first time?

Mendonça: I would suggest that they get their hands on the most current LGBT study reports offering statistical data, trends and demographics within the LGBT community, so that they have some insight. In addition, an understanding of the services, platforms and initiatives that IGLTA provides, so that they get the most of their first conference.
For more on the 2018 IGLTA Conference in Toronto, go to www.iglta.org/convention/ .

Armando Mendonça is a tourism entrepreneur, philanthropist supporting HIV/AIDS charities, and lifestyle & diversity columnist. He can be reached at: armando@baxter.net .