Growth is in the air 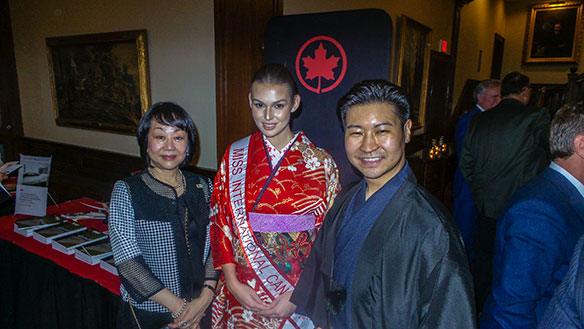 The Japan National Tourism Organization is welcoming an upcoming air link between this country and Japan, service the JNTO believes will help it move nearer to reaching an ambitious goal it has set for itself by the change of the decade.
Air Canada will begin initially daily Montreal-Narita service June 1, using a Dreamliner to ferry people from Quebec to Japan. The route will mark the fourth Canadian city in Air Canada’s Japan network, with the airline also sending people from Vancouver, Calgary and Toronto to the Asian nation.
The upcoming service comes at a time when Japan is playing host to large numbers of Canadians and people from other countries, with some 305,000 Canadians visiting it last year.
In total, Japan saw over 28 million visitors in 2017.
“It’s growing year by year,” Hideaki Nakazawa, executive-director of the JNTO’s Canadian office, told a March 28 Toronto audience.
Japan has set a bold target of hosting 40 million visitors by the year 2020, a goal Nakazawa told his audience that he believes is achievable. “We believe there’s plenty of room to increase more.”

Keen on new markets
The lion’s share of Japan’s tourists are from elsewhere in Asia, with Nakazawa saying that the JNTO is keen on attracting more visitors from both North America and Europe to his homeland. February saw the tourism organization launch Enjoy my Japan, a global, multilingual campaign aimed at attracting long-haul visitors and have them “explore the country beyond the well-known popular attractions.”
Nakazawa said there are now people who aren’t interested in visiting Japan, and the current campaign is aimed at “making them change their minds.”
Enjoy my Japan has a dedicated website, enjoymyjapan.jp .
Nakazawa acknowledged there are iconic images of his country – such as cherry blossoms, Mount Fuji and temples – but added there are many other sides to his country that many here aren’t aware of.
The evening also saw Miss International Canada 2017 Marta Magdalena Stepien address the audience. Stepien has visited Japan and is now serving as a tourism ambassador for it.
The evening saw the kimono-clad Stepien among other things praise the “absolutely stunning” landscapes she saw in Japan, and she also had kind words for the country’s culture and history.
Stepien also appreciated the kindness she said she received from Japanese when she needed the likes of directions, while travelling there. Even those with whom she couldn’t communicate with easily would reach out to help, she said.