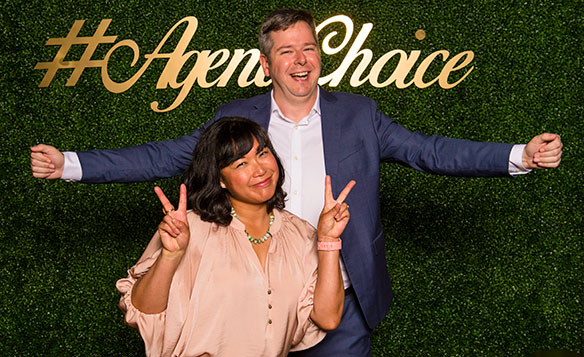 Where were you when the Toronto Raptors won the NBA Championship?

Well, for close to 400 of the Canadian travel industry’s finest, the answer to that question is they were at the second annual Agents’ Choice Awards Gala at the Arcadian Court in Toronto. 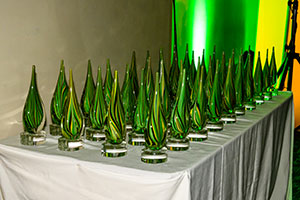 It was a night of celebration and anticipation, as Baxter Media unveiled the results of the 20th Anniversary edition of the Agents’ Choice Awards Readership Survey, and – with all the glitz and glamour of Hollywood’s Oscars – presented awards to the 2019 favouite suppliers as selected by the 6,512 travel agents from across Canada who cast ballots in this year’s survey.

In her welcome remarks at this year’s Gala, Baxter Media’s executive vice-president, Wendy McClung told the audience that: “Travel agents have been our constant and have always played a vital role. They are the front line sellers, the face of your company to their clients. There are no better advocates for the professionalism of this industry than our hard-working travel agents.” 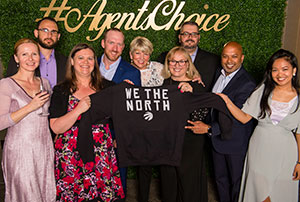 Bob Mowat, executive editor for Baxter Media, explained that: “Over the course of 20 years, one of the things that we’ve discovered is that suppliers who build their businesses in ways that make things better for travel agents are the ones who’ve become the perennial favourites of the agency community.”

And he continued: “I believe that speaks to how this industry has changed and matured since the late 1990s [when Agents’ Choice was launched]. Agents and suppliers have found common ground. They have recognized that they are stronger together than apart, and while disagreements may arise from time to time, working as partners will always be the better way.”

Highlights of the evening included:

• The presentation of 43 awards to supplier favourites in 43 categories.

• The presentation of the Favourite Supplier Reps awards to 35 of this country’s favourite business development managers.

• Our twitter feed – https://twitter.com/CdnTravelPress – was on fire, thanks to the help of our friends at Bannikin; our own editiorial staff; and, naturally, the tweets and posts from those attending.

• Call it coincidence. Call it luck. Call it whatever you will, but it was definitely a magical night being with close to 400 of Canada’s top travel professionals and witnessing the Toronto Raptors win the NBA Championship at the Tourism Ireland and Royal Irish Tours Agents’ Choice Awards Gala After Party.

Steven Johnson of the Bahamas Tourist Office gave the second annual Agents Choice Awards Gala an enthusiastic thumbs-up and described it
as being “very eloquent.”

Johnson also welcomed the opportunity to see a large cross-section of the travel industry throughout the night while also praising great entertainment, food and the downtown Toronto venue itself.

Eloy Govea, the Cuba Tourist Board’s director for English Canada, was also upbeat about the great mingling the gala provided, noting: “It’s a great thing, getting together with so many friends.”

Being presented with the W.H. Baxter Lifetime Achievement Award at the second annual Agents’ Choice Awards Gala was just the latest highlight for a man whose career and life have seen many lofty achievements. 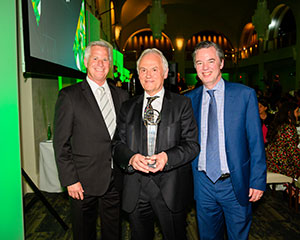 And his efforts to create a better world have also earned him a spot in the Ontario Special Olympics Hall of Fame.

Under his leadership, the Chelsea Hotel has held fundraising events to benefit the likes of Habitat for Humanity Toronto; Special Olympics Canada, SickKids Foundation, which serves Toronto SickKids Hospital; and JDRF.

“Josef is really an icon in the [hotel] industry,” added Terry Mundell, president and CEO of the Greater Toronto Hotel Association, who presented Ebner with the award.

Mundell praised Ebner for, among other things, helping get Toronto’s hotel industry back on track during the 2003 SARS crisis. “When the chips were down, Josef was there.”

Ebner – who’s worked in the tourism industry for 56 years, starting at the age of 14 in his native Austria — fondly recalled his long tenure in the hotel industry, much of which has been spent at the Chelsea.

“I’ve been a lucky guy to run the Chelsea,” he said.

It was an evening that was all about travel agents and presenting sponsors – Air Canada, Sandals and Trafalgar – each thanked them heartily for their hard work and support.

Noting that Air Canada rouge – which now serves 70 destination – has been a huge success since it launched in 2013, John MacLeod, vice-president of Global Sales & Alliances for Air Canada, told the crowd that: “This would not have been possible without the agent support [we get] from across Canada.”

On behalf of Sandals, Gary Sadler, senior vice-president of sales, Unique Vacations, Inc., said it was a great honour to be among so many friends and colleagues and thanked Baxter Media for a 37-year partnership. 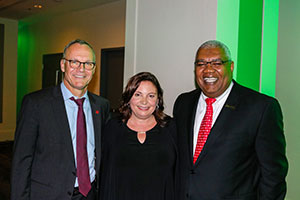 He told the audience that Sandals’ success is largely due to travel agents, inspired by a vision of Chairman Gordon “Butch” Stewart.

“Perhaps one of Mr. Stewart’s greatest visions was the important role that he knew travel agents would play in the Sandals success story. I’ve said it time and time again… Sandals Resorts would not be where we are today – growing from that one resort in Jamaica into a global brand and tourism powerhouse across the Caribbean – without the hard work and support from travel agents.

Anita Emilio, vice-president, sales, Trafalgar and Costsaver Canada, also said it was an honour to be among so many friends. 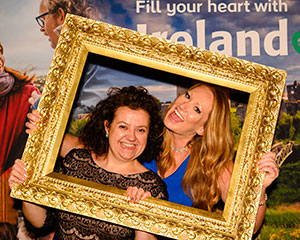 “What an absolute privilege we all have to be here to celebrate another year of achievements that we’ve all worked so hard for. Every year, esteemed Canadian agents are offered the opportunity to cast their votes for their favourite supplier in over 40 categories, allowing them to be heard by the travel industry as a whole. Tonight, we hear from them together, and on behalf of the Trafalgar Canada tribe, we are honoured to be a part of the celebrations as we recognize Canadian favourites, all thanks to Baxter Media,” said Emilio.

She added, “For the past 73 years, it has been the mission of Trafalgar and Costsaver to connect clients to people, places and experiences and reveal the diversity of the places they want to go. And this would not be possible without the hard work and partnerships with our loyal Canadian travel agents and community. Trafalgar and Costsaver have always been and always will be #AgentsFirst.

“We value our loyal partnerships with our agents and thank you for everything you do.”

From the basketball court to the Arcadian Court, the Agents’ Choice 2019 Awards Gala ended on a high note as The O’Deadlys hit the stage and the Toronto Raptors clinched the NBA championship.

Presented by Tourism Ireland and Royal Irish Tours, the after party featured a taste of the Emerald Isle with Irish oyster shucking, Irish whiskey tasting, Irish cheese, champion Irish dancers and Irish music, marking the 20th anniversary of the Agents’ Choice Awards. There were also multiple screens with a live-stream of the Raptors game, so #WeTheNorth fans didn’t miss the court-side action. 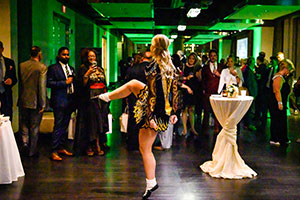 “Congratulations to the team at Baxter Media for creating such a strong program and celebrating 20 years. When we connected on the Emerald theme, it was such a perfect opportunity to work together,” says Dana Welch, manager Canada for Tourism Ireland. “It was such a lovely evening connecting with colleagues and celebrating industry success stories. Including, of course, the celebration of the Raptors’ win – a night folks won’t soon forget.”

Jonathan Sargeant, sales manager for Royal Irish Tours, who was joined by president Ian Duffy and vice president Conor Duffy, told PressToday the goal of the after party was to showcase a bit of Irish culture, music and dance.

“We’re delighted to be a partner of Baxter over the years and what better way to finish off the 20th anniversary of the awards than with a good Irish party, and, of course, with the Raptors; it’s a great celebration,” he said.

Jenni Berg, Business Development Executive at Contiki, said she attended the gala to support her teammates, but wound up making new friends during the after party. 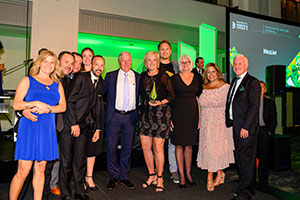 “I’m so happy to support Baxter Media in general because they’re such great supporters of the students of the future through the BSAP program and also travel agents, but I found myself in a corner with a couple of people I never knew, and we had a huge screen drawn over the windows of downtown Toronto, old city hall, to see the Raptors win. We held hands together, jumped up and down and totally bonded, just like when you travel.”

Rod Hanna, director of sales – Canada for the Saint Lucia Tourism Authority, added, “thank you so much for a great evening. This after party is very unique. It’s been an amazing night with a lot of suppliers. You’ve gone above and beyond, and I’m really happy to be here.”