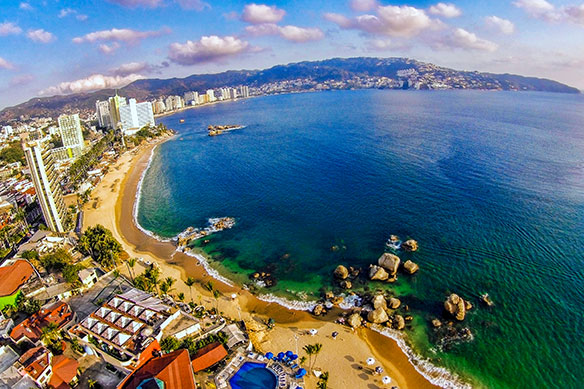 (Photo above: Acapulco is famed for its bay and beaches.)

Acapulco’s on the verge of seeing a very weighty name in all-inclusive lodging arrive in the Pacific Coast destination, with tourism officials expecting it will provide a big boost to a city that has seen its share of foreign tourists vacationing in Mexico fall in recent years.

US-based AMResorts, which has upscale properties on Mexico’s Pacific and Caribbean coasts and some Caribbean islands, plans to open a Dreams property in Acapulco in November, its debut in Mexico’s oldest tourism resort community.

The hotel company is converting the current Grand Hotel, which for a long time was a Hyatt and which is found on Acapulco’s main street and overlooks its best-known beach.
AMResorts is spending over US$20 million to renovate the hotel – which will be one of only a few highrise properties it offers – with the work done in stages.

“We’re very excited,” said Piquis Rochin, spokeswoman for the Acapulco Destina-tion Marketing Office. “AMResorts means a lot to Acapulco because it will bring a lot of confidence.” 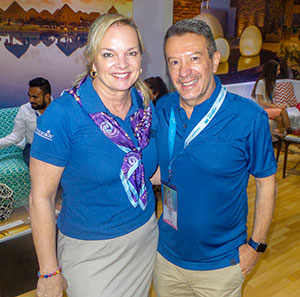 Acapulco primarily sees Mexican vacationers now, with some blaming the drop in foreign tourists partly on security concerns in Acapulco and other parts of the state of Guerrero.

But Rochin said AMResorts’ impending arrival should help reassure tourists that an Acapulco vacation will be a safe one, with AMResorts careful when it comes to choosing resort locations. “They do not take risks,” she stated.

Tourism officials say Acapulco is undergoing something of a renaissance, with Rochin inviting delegates to Mexico’s annual tourism show Tianguis – held in Acapulco in April – to have “the new experience that we have here.”

The past couple of years have seen the city gain the likes of a new airport terminal; an 1,800-metre-zipline that crosses a bay and is billed as the longest over-water zip-line in the world; and hotels, including upscale ones, such as a Banyan Tree, part of a luxury Asian chain.

The city also wants to make inroads in medical tourism, with Rochin saying its sunny climate is ideal for people wanting to recuperate after medical treatments, and sports tourism, with Rochin labelling the Mexican Open tennis tournament “one of the best tournaments in the world.” Authorities decided to build a new stadium for it and other events, she noted.

Reminders of the early Spanish presence in the area include the imposing Fort of San Diego.

Meanwhile, Mariana Senties of the Ixtapa-Zihautanejo Convention & Visitors Bureau, told the same gathering that Zihuatanejo was a community before the Spanish conquest and is now a small fishing town “that observes all the traditions.”

The community is home to small hotels made from local materials. Nearby Ixtapa, in contrast, has larger, modern resorts.

Senties said her destination – also found in Guerrero – is “very connected with nature,” with visitors able to snorkel, scuba dive and surf.

The area is also home to the Soledad de Maciel archeology site, she pointed out.