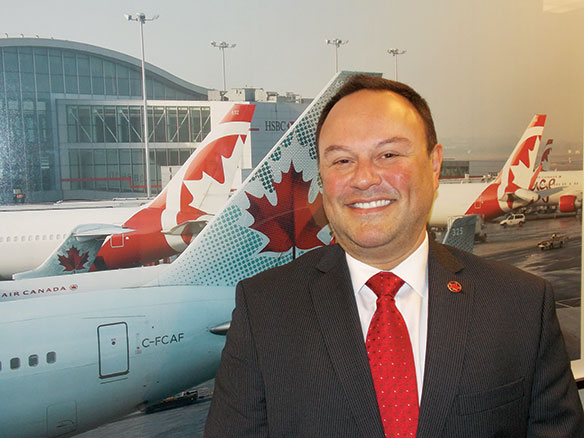 “It’s the best it has ever been,” responded Virgilio Russi when he was asked about Air Canada’s relationship with travel agents. “I think there has been a conscious effort from our side to improve that relationship and to set different parameters to the relationship – the focus has really been on partnership.”
Russi, senior director sales, Canada for the airline, told Canadian Travel Press during an exclusive interview, that the partnership between Air Canada and the travel agency community is all about “how are we going to best service the customer jointly.”
The answer to that question can probably be summed up in two words – simple and seamless. Make things simple and seamless for both agents and for the customer.
To get there, Air Canada has been making heavy investments in training for both its sales team and for its travel agency partners; it has also been finding (and continues to search for) new ways to automate a range of processes; and it has been introducing (and will continue to introduce) products and services designed to provide that seamless experience that consumers are looking for from an airline.

What’s new at GSU?
Going forward, Russi made it clear that there will definitely be more training for the agency community, pointing out that: “We’ve had a great experience with our training platform [the Global Sales University or GSU] – both internally and externally.”
With the success of GSU, it’s not surprising that Air Canada will be expanding the program in 2018, with Russi telling CTP that: “We are simplifying the syllabus to give agents more choice in terms of what they want to have a deeper knowledge on.”
“The fact is, last year, we had 67,000 modules completed at the GSU, and we [did] a survey of all of the agents that were part of the program and 75% agreed that the GSU has helped them in a meaningful way to sell more Air Canada and to sell [Air Canada] better. And 74% considered the content very relevant or relevant. So, I think we had a home run there,” Russi said.

All about Branded Fares
Air Canada will also begin offering Branded Fares in 2018, with Russi explaining: “We have all the infrastructure in place now to basically do whatever we want from a Branded Fares perspective, and very soon this year, you will see us experimenting with different products and different concepts.”
“The nice thing about Branded Fares,” he said “is that the one thing that travel agents have always talked to us about is how can we participate in the sale of ancillaries. This is really the best solution because number one, Branded Fares gives us the ability to track the sale of ancillaries [by the travel agent] quite accurately, and it simplifies the process for them because rather than making the booking and then selling the preferred seat, then selling the WiFi and then selling this or that, you can actually sell everything within a bundle. And that’s obviously all going to be commissioned.”
The result, Russi pointed out is that Branded Fares give agents “the ability to articulate the value of a product or of an experience of
a certain bundle and sell that in the same transaction.”

A popular Liaison
As for Air Canada Liaison – the self-service platform for smaller agencies – Russi said that it is growing in terms of revenue, telling CTP: “It’s still a small base of revenue because by design it is directed to our smaller travel agents, but it has grown and it’s growing quickly.”
He continued: “We have had very, very positive feedback from the agents that are part of Liaison. Even though they are on a platform that is sort of a self-service platform, they feel they’re better supported today than they were in the past. So again, with Liaison, we will see a lot of technical improvements as well this year.”

Making it simple
Efficiency and profitability are two areas where agents are increasingly look for help from their partners, and when asked how Air Canada is responding, Russi said: “Training is obviously a big piece of that. We are fully aware that they [agents] need to understand the intricacies of dozens of airlines and other suppliers. We tend to believe that we [Air Canada] are one of the most important ones that most agencies have, so we think training from our side is worthwhile, as well. [But] we have been working a lot on preparing for more simplification and automation.”
In this respect, he pointed to the fact that Air Canada has been “very vocal” with IATA in Canada, as it looks for them to automate their platforms a bit more.
“They have systems in other BSPs [Banks Settlement Plans] in the world that facilitate automation of commissions, for example. In Canada, it’s still a very manual process that causes debit memos, etc.; so we’ve been working with them [IATA] in terms of, first of all, simplifying our internal processes, number one and number two, providing automation and that will come next year.”

A whole new PSS
Perhaps the biggest news for 2018 is that Air Canada has started work on replacing its Passenger Service System (PSS), which is the core of the airline, housing all of its inventory, sales, airport servicing, etc.
“We are going from our own in-house system, which is called Res III, and we are going to move to the Amadeus Altea platform, by 2019,” Russi told CTP.
He continued: “That’s a major, major change, and it affects every facet of the airline operation; but once this is completed, there will be a variety of features that will simplify, automate and make things a lot more efficient for travel agents.”
Russi also noted that Air Canada picked the Amadeus Altea platform because it is used by a lot of the airline’s Star Alliance partners and is a very “effective system from an international travel perspective.”
“[Amadeus Altea] will make it very seamless for travel agencies to sell Air Canada in conjunction, for example, with Lufthansa. In fact, it will be one single PNR, so the reservation record that the agency has or [Air Canada has] or Lufthansa [has] or any other partner [has] will actually be the same record, rather than a copy of a record,” he explained.
And that’s definitely not “a small thing,” Russi stated. “It’s a major thing in terms of being able to change a reservation and everybody being able to see that in real-time. You know, things that [agents] call us for today – if they need to reserve a seat or if they need to change a name – if there’s more than one carrier involved, there has to be manual intervention. All that will go away with [the new system].”
The phasing-in of Amadeus Altea is a two-year project, and by 2019, “it should be fully implemented.”
Russi continued: “We will basically be sharing the same system as an Amadeus agency, but there will also be improvements for other GDSs, as well, so people will see a huge improvement, regardless of the GDS they use.”
And he adds: “Our choice was very much predicated on making it more seamless for everyone – for our partner airlines and for our partner agents.”

A focus on value
So, the obvious question at this point is what’s next?
Well, Russi said that for agents, there will be more from GSU, Branded Fares and Liaison, before telling CTP that “overall, you’re going to see a lot of product improvements in 2018. As a starter, there’s the 737 MAX, which as of now is fully operational. Currently, we have three or four, and they’re literally coming every week.”
In this respect, he explained that “the people who have seen [the 737 MAX], describe what we’ve done, in terms of the cabin interiors, that they look very much like the 787 cabin. They have very much that wide-bodied experience – and that’s intentional.”
Russi continued: “One of the things that we are intending to do is to make sure that people, no matter in which cabin they are sitting, and no matter where they are going – if they are doing an intra-Canada flight or if they are going to Asia – that their experience is as seamless as possible.”
That means, Russi said that “the environment in the economy cabin or in the premium economy cabin or the business cabin, regardless of the aircraft type, regardless of the route, the experience is going to be much more seamless than it is today – that’s what we’re striving for.”
And he pointed to Air Canada’s “more meaningful” introduction of Premium Economy within North America as an example of this.
In fact, Russi emphasized Air Canada has had “a conscious focus on its Premium product,” because, simply put: “We are a Premium carrier.”

What’s the take-away?
Be that as it may be, Russi pointed out that Air Canada “will always compete on the lowest fares as well, we’re not going to let anyone eat our lunch, but that’s not our focus. Our focus is really value – not lowest price. So, you will see more investment in Premium products.”
Russi used Air Canada’s launch of its Signature Lounge in Toronto – which is a more exclusive lounge experience – in 2017 as an example of this, and made it clear: “You’ll see more exclusive products coming out this year. They are in the pipeline.”
“It is really about providing a superior customer experience,” he told CTP. “There’s a value to that. There’s certainly a cost to that, as well. And we want to articulate that value and help our partner travel agents articulate that value as well.”
As for new routes, well, don’t worry, Air Canada will continue to expand its network, and while Russi said there will be new destinations coming online, at the moment, those destinations are still
under wraps.
“Looking back, it’s quite interesting because in the last three years, we’ve launched 72 new routes … and every single one has been successful,” Russi told CTP.
So, what’s the take-away for agents, well, says Russi: “We are Canada’s carrier and we cover the globe. We stand for quality – that’s what we strive for – and I think [agents] should be very comfortable and confident in selling Air Canada and recommending Air Canada and articulating to our customer base why they’re going to have a better experience at Air Canada than they will [have] anywhere else.”

Discover the Wonders Of Ireland With Air Canada 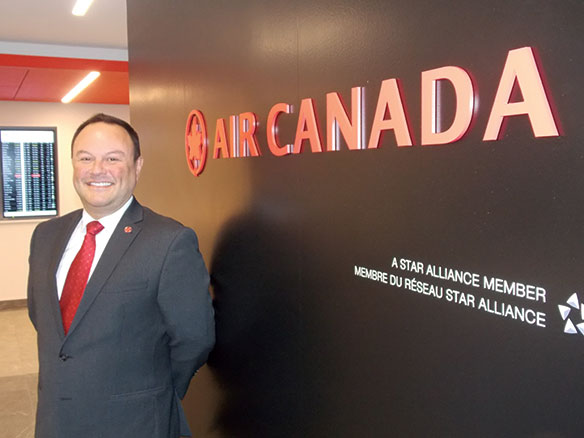